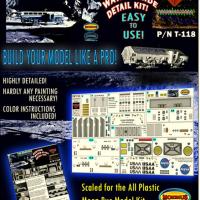 TSDS makes products designed for the Sci-Fi modeler and the decal set for the Moebius Moon Bus is just one example of the excellent quality for which TSDS is known.

The decals are advertised as color water-slide decals and indeed they are both colorful and use the traditional dunk-and-slide application technique.

The decals are printed on a single sheet, approximately 5x9. The markings are clear and crisp. Since the entire sheet consists of one large piece of carrier film it is important that each decal be removed from the carrier sheet with the “cut” lines being as close to the actual marking as possible.

The decals responded very well to a short dip in water and none were damaged in the application process even though I handled some of them rather roughly. For all intents and purposes one can apply these decals in the same fashion as one uses for those decals that are supplied in any typical model kit.

Some of the decals present a “faded” appearance in which the predominant color fades as one approaches the edge of the decal. Pulling out my Optivisor and other magnifying lenses I found that this “fade” was accomplished by the clever use of a “screen-like” pixel pattern. The result, once the decal has been applied, is a very realistic “weathered” or “wash” appearance to those panels for which the decals were intended. The pixels are small enough to blend together to the naked eye and the overall effect is excellent.

The decal sheet offers “alternative” decals which can be used to create markings that one will not see in the movie in which the Moon Bus was featured. Several NASA markings, in the old style with the red swoosh flying across the NASA logo are present, as are two different styles of the USAA logo.

It is possible to use the decals to provide all of the “color” on the model with the exception of the basic white base coat and the colors visible on the landing skids. Cabin markings and stenciling, paneling for the retracting cabin doors, and various panels for the exterior are provided. A full set of screens, dials, and panels for the control panel are included, as well as a 2nd “spare” set….just in case one gets a bit clumsy with the first set.

These markings add a significant amount of detail and color to the Moon Bus and provide an easy, paint-free method of enhancing the basic Moebius kit. The decals are easy to use, and react well to Solva-Set and the Micro products I tested on them.

This product is highly recommended and thanks to TDSD for providing this product.