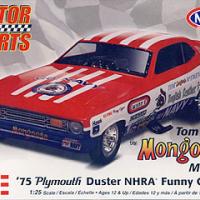 “The Mongoose” is a name that conjures up a lot of memories for me. I remember the Hot Wheels renditions of the “The Snake” and “The Mongoose” as any Hot Wheels collector worth their salt had those cars in their case. What I didn’t realize at the time was the marketing savvy behind those shiny little toys cars. As it turns out, Tom McEwen, the driver of “The Mongoose,” was a master of promoting drag racing and one of the key figures in developing sponsorships that although common today, were a novel idea in the late 1960’s and early 1970’s. Toms racing career would span 40 years and while he didn’t accrue the winning record of his nemesis Don Prudomme, the rivalry Tom created with the Snake and the Mongoose has become the stuff of drag racing legend.

Packed in a top open box with a photo of the model on it, you get 102 parts cast in white, clear, chromed plastic and includes a metal axle for the rear wheels. The tires are rubber. Full instructions and a nice decal sheet round out the contents. The parts are nicely cast and are marked Revell 2010 but I suspect these are not truly new. The chrome parts are the old fashion variety in that the chrome is very shiny and brittle with flash. This type of chrome doesn’t appeal to me for two reasons. First it’s just too bright for the scale and second several parts are in halves and hiding seems is near impossible with the chrome on them. I would prefer plain white plastic with Alclad chrome. That said, I used the parts as provided whenever I could. As far as accuracy, the only problem appears to be the engine mounting that is too far aft. Photos of the real car show the blower intake protrudes through the hood instead of behind it. It would not be hard to fix, but I left it as is.

I altered the assembly order since the body cannot be painted with the glazing and internal bulkheads in place. There is a mould seam across the front pillars and over the body top that needs sanding. The engine assembly is next and builds up into a nice hemi engine. The intake for the blower is a two-part chrome affair. The seam was not good so I fixed it and painted with Alclad chrome. Next, the frame was built up starting with the one-piece chassis to which the engine and fuel tank, driver’s compartment and other goodies are added. I had to break with my usual review rule of building out of OTB on this step. Unlike most car models, you can hide the engine but funny cars don’t allow this. I decided to wire and plumb the engine as a result. Don’t be looking for correct firing order or plumbing routes because my goal was to busy things up. Be careful as the parts have very small glue points. This results in delicate assemblies that I had to fix more than once. A note here, the instructions would have you paint the frame and baffles dark blue like the exterior but a photo of the real car, I pulled off the Internet shows the inside as lighter blue so I used Tamiya TS-23 Light Blue.

Painting the body requires some good masking and patience, as there are several colors involved. The body has a red upper section and dark blue lower section with a white panel (provided as decal) separating them. I wanted white under white as I feared the white decal would not cover dark red or blue. I cut the decals (number 3&4) and used them to determine where to mask. All colors are Tamiya spray cans. First the entire body was painted TS-26 Pure White. I then masked and painted the upper side TS-39 Mica Red followed by masking and TS-51 Racing Blue on the lower section. The photo I had also showed a light blue section on the front valance. It appears to be the same as the TS-23 color used earlier. The inside of the body except for the baffles around the driver are all black.

One of the coolest aspects of race car models is the variety of markings applied and this kit is no exception. At first glance, it looks like a difficult job as a few of the decals are very large and have to cover curved surfaces. The stripes over the top and rear deck are separate pieces. It took a long time for the decals to release from the backing paper but once loose, they were durable and lay down very nicely. The large white side panels really did need a white undercoat. My masking was off a bit and you can see the color through them. The only decals that gave me trouble were those around the windshield edge. A little micro-sol cured the problem.

This was the first Funny Car model I’ve ever built. I was really surprised by the level of difficulty even for someone like me who’s been at this for a few years. The skill level three rating on the box is accurate. As it turned out, the engine wiring I installed interfered with the body closing so I can’t show you that configuration. If I had wired the engine correctly, it wouldn’t have been an issue as the wires go forward. Lesson learned for the next one. In retrospect, I would check the fit better as the finished kit has very tight tolerances between the chassis and the body. I would also strip the chrome parts and use the Alclad process. Next time I won’t lose the front wheel fairings which the model gremlins napped somewhere in the process. In spite of the challenges, this won’t be my last funny car model. If you have a little building experience under your belt and want a colorful bit of racing history in your collection, this is the ticket.

Many thanks to Revell and IMPS/USA for allowing me to review this kit for you.