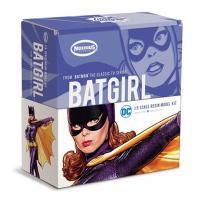 Moebius Models has been a great boon to modeling especially those who like Sci-Fi, Monsters and Super Heroes. A while back they started producing figures based on the 1966 version of Batman. Currently Batman (Adam West), Cat Women (Julie Newmar), The Riddler (Frank Gorshin), Robin (Burt Ward) and The Penguin (Burgess Meredith) have wonderfully detail kits out. To really celebrate these, Moebius has issued their Batgirl kit as a 1/5th scale resin kit. The kit represents the late Yvonne Craig in all here glory with the red wig and green contacts as she was on the 1966 series. The kit is made of resin and housed in a beautiful box with each part in an individual Styrofoam slot so there is no rubbing or issues with broken parts. The finished kit is 16” tall and there are great instructions and painting references. The kit was sculpted by Jeff Yagher and Tony Cipriano, two of the best out there today. A base and nameplate are also included.

Opening up the kit, there are fifteen parts in yellow resin and only a trifle few seam lines to sand out. Moebius also included a molded in pin in her right boot to make sure she stays secure to the base. I started by joining the upper and lower bodies. A few tweaks were needed and some super glue and done. I also added the face to the cowl/wig assembly and glued into place. I added the left arm and it fit well and it was super glued into place.

The right arm is in two pieces and this took me some time. The upper and lower arm fit together well but it some finagling and finessing to get the arm to sit like it was on her hip. I had to Dremel out the area on the waist slightly. In hind sight, I would have done it differently and attached the upper arm first and then get the lower arm to fit. In the end, not that long or big of a deal. At this point, I had four subassemblies- the cape, the base, the body and the head. I did leave the mask off the head for ease of painting. Seams were addressed with Aves Apoxie Sculpt and sanded flat. The entire kit was primed with sandable auto primer and left to dry.

I addressed the body first. Looking at the pictures in the kit and bunches of on screen pictures, the suit was purple and depending on the picture, it was darker or lighter. The boots and gloves were lighter than the suit and all purple. The suit itself also had sparkle in it- silver or silver gold combo in varying amounts. Since I don’t paint a lot of purple and could not find one I liked, I made some. Insignia Blue and Insignia red were mixed until I had the color for the suit. I mixed extra for touch ups and the inevitable oops! The entire body was coated with this base purple and let dry. To get the sparkle, I used thinned Tamiya silver and gold almost down to a wash consistency and thinned with lacquer thinner at low PSI. This created a nice sparkle pattern and this was used liberally around the figure highlighting the top areas for contrast. I also used Alclad pale gold thinned and did the same. This is best done slowly so she still looks purple and not metal colored. I also masked and painted the belt gold at this time and added a black wash. Once done, 3-4 coats of gloss were shot over the body.

I painted the face next (prior to the cowl) and used Garage Kit USA colors for the flesh building it up slowly, dark to light. Once close, I painted the eyes and the lips to give myself reference. I flat coated and added some pastels for red cheeks and subtle shading and sealed again with flat. I masked the face before painting the cowl. After masking, the base color was shaded with additional red for a lighter purple and this was used on the gloves and boots. The back and bottoms of the cape also as well as the cowl also. I lightened again and highlighted areas of the cape, boots and gloves. These were sealed with flat coat/gloss coat 50/50 mixture to get a semi gloss shine.

The base was finished as stone using washes, pastels and paint and sealed and the body was added. To finish the cape, I needed to get the interior yellow and have it sparkle. I masked parts and used Tamiya yellow with just a dash of red and coated the cape interior. I lightened this and highlighted the raised areas and then work on the shine for a satiny finish. To do this I used an automotive product which is normally an additive for paint called PPG Pearl Additive. I thinned this and after some practice, built up about 6 layers on the yellow part of the cape. This gave a great looking satiny finish and once dry, the cape was added to the body.

Before adding the top, I needed to finish the utility belt and to paint the bat on her chest yellow. I used silly putty to mask the bat and shot it yellow. I did the same to the pouches on the utility belt and belt buckle. The background on the belt buckle was colored using a drafting pen. Needless to say, during all the processes, there were a bunch of touch ups. The buckle and pouched were added and pinned in place. The painted black face mask was added to the head and the head to the body. Another round of touch ups (and finishing the name plate) and she’s done. You can see by the pop bottle, this is a large kit. It is well engineered and the subject matter is superb.

I can’t say enough great things about this kit – from the sculpting to the pose to the fit to just everything, it’s a winner. And a huge thanks to Moebius for picking such great subject matters. Please keep them coming.

Face Close Up
Previous Next