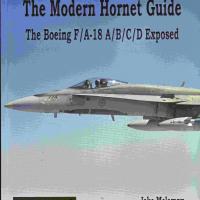 Reid Air Publications has issued a new book and the winners are anyone interested in the F/A-18 A/B/C/D Hornet! For those of you unfamiliar with the series, Jake Melampy has written his series of books detailing specific airframes. F-16's and F-16's and others have been detailed before as well as others but the newest covers the entire series of the F-18's. The format of the books starts with the cockpits and works its way back to the wings, vertical stabilizers, horizontal stabilizers, fuselage and landing gear and finishes with all the ordinance used by the Hornets.

The first thing you will note about the book is the quality of the pictures. Whether they are operational shots or detail shots, the pictures are superb- in focus, clear and well lit. Even the "in-action" shots are beautiful. The detail shots are fantastic with color and lighting letting each area shine and shot all the needed detail any modeler could want. While progressing through the pictures, Mr. Melampy notes the differences and details and point out all the small details and variations. This covers the A-D versions.

Let's take a look at one section to show the level of detail. For the Vertical Stabilizers, the pictures start with the trailing edges and detail the RWR (Radar Warning Receiver) and ECM (Electronic Counter Measure) antennas. The inner and outer ones are covered detailing the lights and all the bumps. There is also section covering the tail artwork for many different nations. These pictures also include the BuNo for each aircraft tail. The end of this section covers the formation strip lights and shows the reinforcement plates on the vertical surfaces and where they attach to the fuselage. The text goes into depth about how and why they are added. The detail, pictures and explanations are fantastic.

This same treatment is given to all parts of the plane from the ejection seat to the tail hook and from the nose to the tail- it is fantastic and the pictures are works of art. This book is a must for all fans of the Hornet. If you want answers to questions or want to super detail a kit from the 1/72 Academy kit to the 1/48 Hasegawa or Revell kits to the 1/32 Academy Hornet, this book should be number one on the list.

This book is awesome and very much recommended. My thanks to Reid Air Publications and IPMS/USA for the chance to review. Head to Reid Aris site above and get one!