A Modelers Guide to the Sabre and Fury 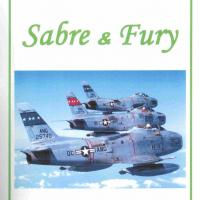 New from Aero Research comes another in the “Modelers Guide” Series, and this time it’s the Sabre and Fury that undergo Jay Sherlock’s microscope. Soft cover (spiral bound) with 152 pages of tech data, kit reviews in all scales, model changes and options that include explanations on the various wing changes to Sabres and Furies. There are also numerous photographs, both in color and black and white, included. This is followed by a breakdown on the various aircraft themselves, beginning with the XP-86 and plowing through the 29 Sabre models and 7 of the Furies. With each aircraft, there is an explanation as to what the differences are for each one. The final chapters deal with serial # lists, operating units, surviving aircraft and finally references.

Let me say at this point that this is the second of this series that I’ve been privileged to review, so I must state that I am a huge fan of these publications for several reasons. First and foremost would be the format in which it’s presented. As an example, you’ve chosen to model a specific Sabre of which there are but one or two kits available, neither of which is the correct mark. With this publication, simply select which version you’ve chosen and see what the differences are and either make the corrections or pick another subject. EZ PZ!! Next, the kit review section, which I’ve used to advantage prior to embarking on yet another subject to be exiled to the well known “shelf of doom”.

Finally the spiral binding allows the book to lay flat without the necessity of a five gallon drum and several clamps to keep your place while leaving both hands free to model.

All this having been said, I must give a “most high” recommendation to this publication and, in this case, I am not alone. On the day the book arrived, we were scheduled to have dinner with a close friend of mine. It just so happens that it was Larry Davis, who knows more about the Sabre and Fury than any person I know. He had the opportunity to skim this publication before we went out so, over dinner, I asked him what he thought of the book, to which he replied “I’d buy one.” Not much higher praise, considering the source.

In conclusion, many thanks to Jay Sherlock for the review sample and to IPMS/USA for the opportunity to review it. Please keep the good work coming.