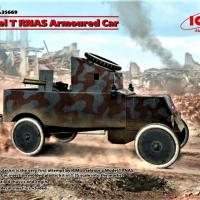 ICM has certainly put its Ford Model T molds to good use, making no less than four different variants of this ubiquitous little vehicle previously, all variants which served with distinction in World War One. Now a fifth variant has been added – a little-known armored version used by the Royal Naval Air Service along the Russian Front. Really more of a weapons carrier than an armored car, only nine of these were ever made. I rather suspect that it was seriously underpowered for the additional weight of the armor, which would have made this a strictly hard-surface weapon of war.

Like the vehicle itself, the kit is a relatively simple build. It also comes with a separate sprue containing the parts for their newly released Vickers Machine Gun, which is a fine little kit in and of itself. There are three moderately-sized sprues with lots of parts you won’t need, a clear sprue for the lamps, a small decal sheet, and that’s about it for complexity.

I began with the chassis and the nicely detailed engine. My observation on the engine build is – do not waste a lot of time on it, as there is literally no way to show it once completed. However, you will at least know it’s there, if that’s any comfort.

The body came next, including the odd little armored driver’s cab. This threw me a bit, as they went to the trouble of detailing it out, including individual foot pedals, then neglected to include a driver’s seat or a way to display the interior. Suffering from an inability to Leave Well Enough Alone, I looked things over and noticed that the build as offered shows no location for a fuel tank. Logic dictated that it must have been located under the driver’s seat, so I used the extra parts in the kit to install this and scratched a simple seat resting on top. The next part was a little more complex.

I wanted to have the side-hinging door open to display this little compartment, so modified the door to open, only to discover that its action was blocked by the side of the cargo bed. Examination showed that this ALSO had a side-opening hatch and that the only easy way for the driver to squeeze into his compartment would have been to have both doors open at once. So I did a little scratch work to show this interestingly awkward feature. Obviously, it’s not a difficult conversion and in my eyes, at least, makes for a more interesting model.

The last portion to finish was the armored engine shroud, and this is the only place on the build where I encountered any obstacles. The long hood piece is not a terrific fit to begin with, and simply will not close over the radiator. I found that you need to cut the filler cap off the radiator to get it to fit, and even then, it’s a bit of a struggle, so patience is suggested here.

Final assembly was the Vickers gun and associated equipment, and all of this fit beautifully together. It comes with both standard and prone tripods as well as ribbed and non-ribbed shrouds, but all the pictures I could find of this vehicle showed this weapon to be in a full upright position with the smooth gun shroud.

Painting was quite straight-forward, although there appears to be some argument over the color of the add-on camouflage. The box top shows this to be brown, whereas all the other drawings show this green. I chose the box top version as I thought this was more distinctive. Add the few decals, finish the lamps, and that’s about it. Like I said, it is not a complex kit.

Comparing it to pictures I found on the net, this appears to be a fully loaded version of this tiny machine, as some did not carry the spare tire on the roof. There is not a lot of room anywhere on it for much additional equipment, so I can only assume it was mostly used for short-range patrols at best. In any case, the model does an excellent job of capturing this little vehicle, and it is the most distinctive version of the Model T I currently have in my collection. It only took about a day to build it completely, including the modifications, and only another day to completely paint it, so it’s a wonderful and enjoyable short-term project for those getting otherwise buried under more complex endeavors.

My thanks to ICM for adding this interesting little warrior to my collection, and to IPMS/USA for letting me take a shot at it. Highly recommended!