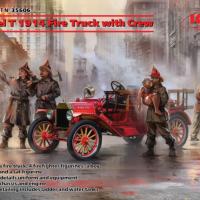 Firefighting has a long and noble history in the United States, dating back to the 17th century following the burning of Boston in 1631. The first volunteer fire company was established by Benjamin Franklin in 1736 in Philadelphia, and became a model for other colonial cities to follow. 1853 saw the establishment of the first professional fire department in Cincinnati, and thus the modern, fully-paid and professional firefighting force was created.

Originally, most firefighting equipment was horse drawn, but the advent of cheap, readily available gasoline-driven vehicles changed that. Enter the ubiquitous Model T, a simple, robust and affordable machine capable of carrying at least rudimentary firefighting equipment and personnel to emergency locations quickly and easily.

The Model T kit, much like the actual vehicle, is comparatively simple to assemble. It features a nicely detailed engine, and a relatively simple but accurate undercarriage that goes together quickly. The detail level throughout is high, with separate floor pedals and numerous lamps and other accoutrements associated with the diminutive machine. Firefighting equipment is confined to water tanks and hose and a rack for ladders. However, extra axes are included in the figure set and these can be added to the hose rack for extra “clutter.”

There were no real hitches in the assembly process, although a dab of putty was needed around the edges of the floor boards, seat padding and water tanks. Otherwise, everything went together without difficulty. Because of the basic simplicity of the vehicle I had the whole thing assembled and ready to paint in about an hour and a half.

To ease the painting, I left the hose, fire extinguishers and ladders off for separate detailing. When it came to painting, I elected to keep weathering to a minimum, as fire departments are notorious for keeping their machinery well maintained and shining. Although fire truck red is actually a high gloss, I toned this down to be a bit more to scale and made my own “brass” color from gold and Burnt Sienna oil paint. The final result, in my view, is really striking.

The figures supplied are also relatively simple, with virtually no add-on equipment. Two figures feature long firefighting smocks with skirts while two feature shorter smocks. Of the latter two, one carries a child and another carries a rescued cat in his helmet. A little putty is needed for the long smocks, and a bit for the child being carried. Incidentally, ICM doesn’t provide very clear instructions regarding these combo figures, and I found it took a bit of trial and error to get them right. In fact, although my “cat rescue” combo came out acceptably well, I would recommend placing the cat figure facing the rear of the helmet instead of the front as I did, for a somewhat better fit. As to additional equipment, only four fire axes are included, although only one is actually necessary. The famous firefighter helmets are each composed of three pieces, which I found easier to assemble and paint on the sprue (with the exception of the cat carrier).

Although all four figures are excellent in themselves, they’re not really appropriate as a single inclusive scenario. The two figures in long coats make an obvious one, and the other two would be better as individual items. I can definitely see the cat rescuer walking away from a tree with a little old lady waiting, for instance. This situation doesn’t actually pose a problem (in my mind) as the Model T is basically designed for just two passengers anyway. How you use these figures and in what combination is strictly up to you, of course.

All in all, this is a truly excellent combo kit, with everything one needs to create several potential dioramas. Such historical civilian kits in this scale are few and far between, and I sincerely hope ICM continues along this vein. Some turn-of-the-century civilians for their taxis and double decker bus would be most welcome, for instance. In any case, you can’t go wrong with this lovely set. My thanks to IPMS/USA for a chance to add these terrific items to my collection, and to ICM for creating something unique. Long live Ukraine, and happy modeling!