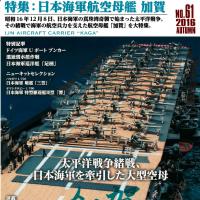 Model Art Issue 61 is typical of other Model Art magazines in that it is written entirely in Japanese, with occasional English words, usually in article titles or in captions. The Vessel Model Special is a quarterly issue that focuses on naval subjects. Each issue leads off with either short articles on a finished build or an in depth step-by-step ‘how to’ on the build and painting. The finished model photographs are of high quality in brightness, color, and depth of focus. Advertising comprises the inside covers (and back cover) along with another four pages showing what is available and new, always useful for building up that wish list. I counted nearly 600 photos (mostly in color) along with ten 1/700 scale drawings. You will find throughout this journal, period photographs of the real ships and aircraft involved in battle. Additionally there are a lot of color scrap drawings highlighting details in the Ship Construction series.

There are a lot of incredible models in this autumn edition as I was just amazed at what could be done in 1/350 scale, let alone in 1/700 scale. This issue’s feature is on the IJN Kaga aircraft carrier and includes one build review of the Fujimi 1/350 scale kit and three builds of the Fujimi 1/700 scale kit. Originally started as a battleship, the Kaga was converted to an aircraft carrier to comply with the Washington Naval Treaty. She met her ultimate fate at Midway where her crew scuttled her after being heavily damaged. The USS Saratoga (CV-3) is used to represent the US side for comparison.

Check out the photograph of the IJN Kaga on page 39 to see the incorporation of photo-etch and scratch build detail that can be done in a 1/700 scale ship model. The step-by-step builds include a considerable amount of scratch building to improve the kit parts. The 1/700 Fujimi build article on the IJN Kaga as she appeared in the Pearl Harbor attack includes details on how to use Adobe Photoshop to create a more realistic flight deck. To complete the feature on the IJN Kaga, three-view drawings in 1/700 are presented as is a pictorial on the history of the IJN Kaga.

My favorite section of the Model Art magazines is the Ship Construction series where color paintings are used to help expand on the black and white period photographs. This issue focuses on the ships bow starting with bow rams to various decorative designs that ultimately led to the large Imperial Seal of Japan, a large chrysanthemum, prominently leading the way.

I find the Model Art magazines useful, even though I don’t read Japanese. The pictures of the built up models, articles showing the build process, painting features, and historical photography all provide useful information. Model Art magazines are available from Dragon Models USA’s many retailers and from various overseas retailers, such as Hobby Link Japan, Hobby Search 1999 Models, and Lucky Model.

My thanks to Model Art and IPMS/USA for the chance to review this great issue.