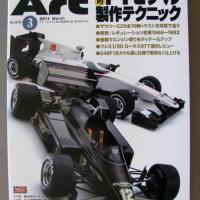 The March publication of Model Art Modeling Magazine focuses on Formula 1 racing with several articles filling the first sixty-three pages of this issue. The magazine also includes new kit reviews, modeling tips, and new kit and item releases. As is typical for Model Art, the magazine measures 182mm by 258mm (about 71/8 by 101/8 inches), and is printed on thick, glossy paper. The production quality is high with these magazines, and just over half of it is printed in color with black and white pages interspersed throughout of the issue. Just in case this is the first review of a Model Art magazine that you are reading, understand that the entire magazine is printed in Japanese with only an occasional English subtitle for those of us who are monolingual, or are just unable to read Japanese text.

This issue begins with a two-page spread across pages 2 and 3 containing “new item special information” in five text blocks. Following the Table of Contents and a full-page photograph of an F1 car in motion on a track comes the first article, which is about Lotus 97T Renault cars from the Portuguese Grand Prix in 1/20 scale. One vehicle is the P8 with Olympus Camera markings; the other is the P12 with John Player Special markings; both are made from Fujimi kits. At the end of this article is a single page with two photos of Ayrton Senna in the real 97T that was previously discussed. The next article is about the Ferrari 248F1 from the 2006 Japanese GP, car 5 driven by Michael Schumacher in Marlboro markings based on another 1/20 scale Fujimi kit. This six-page article contains in-progress photographs, as well as shots of the finished kit, and several photos of the real vehicle.

Pages 22 through 29 are dedicated to the Sauber C29 driven in the 2010 Bahrain GP as car 29 by Kamui Kobayashi. The kit is an FS Model 1/20 scale resin kit representing the early version C29, and again, having photographs of the real vehicle in the article provides a side-by-side comparison of the early and late C29 cars. Thierry Boutsen’s Williams FW13B from the 1990 British GP is the next F1 car, and is represented by a Tamiya 1/20 scale kit. The article accompanying this build focuses on the engine, air intakes, and figure painting, rather than the overall car as in the previous articles. A Leyton House CG901B driven by Ivan Capelli as the 16 car at the 1990 French GP covers pages 36 and 37, and uses a Tamiya 1/20 scale kit. Another two-page article 2010 1/24 scale Ferrari F10, Mercedes GP MGP W01, and McLaren Mercedes MP4-25 comes next, and only Revell Germany’s Ferrari kit is specifically spelled out. Pages forty through forty-three dedicated to the Looksmart 1/43 scale Dino Racing Special “The Circuit Wolf”. The next dozen pages are all black and white kit and real life photographs of the cars described in the earlier articles, specifically the two 97T’s, C29, FW13B, and CG901B. The final eight pages of the F1 section detail the 1966 through 1982 F1 cars, and consist mostly of line drawings of the body shapes as they evolved

On page sixty-four, we leave the world of Formula one, and find a review on the 1/700 scale waterline kit of a 1938 Japanese warship (I apologize here, but the lack of English text precludes my ability to provide additional detail). This four-page article is all in black and white, and includes photographs of the completed ship as the kit contents, and line drawings of the starboard side and top of the ship. After some advertisements there is a new kit review of Hasegawa’s 1/12 scale Scot Racing Team RS250RW in 2009 World Gran Prix 250 Champion markings. The next new kit reviewed is the Fujimi 1/700 scale Carrier Battleship Ise, which is followed by a review on two Aoshima kits of the 1933 Hatsuharu-class destroyers Hatsuharu and Nenohi, both in 1/700 scale.

The magazine moves away from ships on page 94 with the review of Dragon’s Smart Kit release of 7.5cm PaK40/4 auf RSO in 1/35 scale, which is shown with three figures. The first aircraft reviewed in this issue is a Special Hobby 1/32 scale Nakajima Ki-27Ko, Nomonhan Aces kit. This is followed by a 1/72 scale Zvezda Mil Mi-24VP Hind E helicopter and on pages 106 through 109, a Fujimi 1/72 scale F-35B Lightning II. This is the Short Take Off and Vertical Landing (STOVL) variant of the F-35, and from what I see in the article, is quite advanced as compared to the Italeri release from several years back. On page 116, there is an article entitled “S. Kitazawa’s Neo Historic Garage 1980’s” featuring a 1/24 scale 1981 Celica XX. The magazine concludes with several short write-ups on products varying from kits, to detail sets, to paints, to tools, and even some decals.

Similar to my previous reviews of Model Art, I do feel that this is a quality magazine, and Formula 1 modeling fans will appreciate the information provided to them in the first sixty-three pages of this issue. Although the magazine is written entirely in Japanese, the great photography and drawings will benefit any model enthusiast, and there is a little something for everyone in this issue. I personally enjoy seeing what the model builders in Japan are doing, and the techniques, tools, and parts that they are utilizing.

My thanks to the folks at Model Art, Dragon Models USA and IPMS/USAfor making this issue available for review by the IPMS-USA review corps, and thanks to you for taking the time to read it.