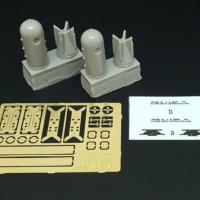 Brengun adds to its catalog with Attack Hobbies re-release of the Mk XVII depth charge in 1/48th scale. The set contains the parts to make and mark two depth charges along with the pylon for mounting. Inside the set, you will find two well-cast depth bomb bodies and nose fuse stalks in gray resin, a photoetch sheet containing the parts to make two pylons, the fuses for the bomb, and a small decal sheet for the one marking on the depth charge.

Assembly starts by removing the depth charge and nose stalk from the resin. Make sure the nose is sanded smooth. Glue the stalk to the direct center. The tail band needs formed into a ring. When I did this using my PE bender, the tail was too big in diameter and would not touch the four legs. I cut ~ 2 mm off the tail and reformed and it as better. If I make the other one, I would cut 3 mm off. I left off both fuse spinners for painting.

The other part of the construction is the pylon. This involves a fine pair of the folds on part 2 which leaves the 1mm wide bottom. The top, Part 1, is folded the same and slips over Part 1 and is glued in place. Two flat bases are glued onto the top of the pylons. Make sure these are square. The last thing is to add the shackles to the bottom. I glued this to the depth charge.

The pylon is the color of the bottom of whatever plane you are adding tis too. The depth charge is either light gull gray or olive drab. I used Xtracolor light gull gray for both and let dry. I added the decal and added wash. I then flat coated the parts and added the two silver spinners and done.

Depth charges are largely overlooked, and this set gives the model builder an opportunity to add some variation. I would recommend some experience to get all the tiny bits added for this kit but assembly wasn’t too bad.

My thanks to Brengun for the opportunity to review this great add on.