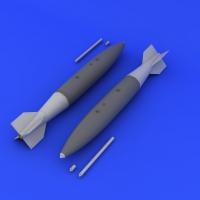 Eduard has produced a 1/32 scale version of the Mk.84 2000 lb. general purpose bomb and it’s the largest common bomb used in the military. Looking through my kits, there isn’t a good representation of this weapon in this configuration (there are plenty of laser guided versions) so this is a welcome option for modelers.

Inside the package you will find parts to make two bombs. There are two front bomb halves and two rear fin sections. Also included are three different fuse options, a set of small photoetch rings for detailing the rear fin section of the bomb and a set of decals. Also included is a nice set of instructions in color. The decals come in either white markings or yellow. More on them later.

Construction is simple. Remove the molding plug from the back of the front bomb section. There is a keyed part here so don’t remove it all. The back section is best removed with a razor saw. Cut down from each fin and trim off the block. Then cut the final section off. A bit of sanding to clean up and you can glue the front and back halves together- the keyed parts ensure a great fit. A small photoetch ring is added to the very back behind the fins. I then mounted the bomb on a pole for painting. I added a little filler at the joint in the middle and smoothed with lacquer thinner.

Painting is pretty straight forwards - olive drab from Xtracolor was used and let dry. You have two decal options - yellow or white markings. The decals are very flat but go on well and settle well. The yellow nose band was a little short so I double up and touched up with yellow paint. I added a wash of Flory black to highlight the details and then flat coated. I chose the fuse I wanted and added it. The tip was coated silver and the bomb was done.

So in summary, great subject matter, absolutely first rate casting and ease of assembly make this a must have for anyone wanting to add a really heavy load to a 1/32 scale plane. Highly recommended. My thanks to Eduard for the review sample.

All the fuses
Previous Next