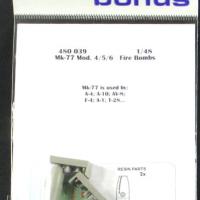 The Mark-77 bomb (MK 77) air-dropped incendiary bomb contains a fuel gel mix that is similar to napalm, but different in that it is kerosene-based rather than gasoline-based. Of course, its effects are similar to napalm, thus the term is used generically to describe the Mk-77 even though it technically is not napalm. The Mk-77 is the primary incendiary weapon used by the US, and has been used in both Operation Desert Storm and recent operations in OIF/OEF. One of the main uses during Desert Storm was to ignite the miles of oil filled trenches being used as barricades by Iraq against collation forces.

The first variant of the Mk-77 carried 110 gal of the incendiary mix, which was later reduced in the Mod 1 to 75 gal. The later Mods kept the same 75 gallons of content, but are slightly heavier. The most common various Mods are:

This Aerobonus set can represent any of the Mod 4 and Mod 5 variations. I don’t know where the Mod 6 on the package came from, as some research online yielded no hits on a Mk-77 Mod 6.

The hanging bag with enclosed card backing comes with two resin pour stubs, each with all the parts for one complete firebomb, giving two bombs total in the bag. Casting is perfect, with the crisp detail we expect from anything done by Aires. The bomb comes in a single casting, eliminating any troublesome alignment of halves. All the details are there, including the filler caps and fuse wire guides. Additional items for each canister include two fuses and an optional ring cap, but I was unable to determine what it represents. Two suspension lugs are also included if you decide to show your canister off the aircraft pylons.

Putting together your firebomb is straightforward. Just cut off the bomb, drill out the end that the pour stub was attached to, and insert the igniters. The bombs are all done in a dull to semi-bright aluminum, depending on how long they have sat out in the open. Some decals are provided for the various markings, and these also include some graffiti, though the spelling and word order is a bit odd. For instance “Feet” is spelt “Feat”, and the phrase “Not for use of a Cold War” should probably read “Not for use in a Cold War”. I’m still not sure what “Fever the Thick” means… maybe “The Thick Fever”? I also had an issue with the ink on the decal sticking to the cover paper. Seeing that, I would suggest a coat of Microscale Decal Film before use just in case.

I don’t think there are any plastic renditions of the Mk 77 Mod 4 or 5. The only item I had on hand to compare it to was the True Details version (former KMC molds), and though they both have the same general shape, there is far more detail on the Aerobonus items.

This is no doubt another winner by our friends at Aires within the Aerobonus line. I love that with Aerobonus, my ordnance can now be as detailed as the model I spent months detailing out. I have a feeling these are going to be paired up with another set of Aerobonus Mk-77’s and hung on an AV-8A Harrier I have been itching to build.

My thanks to Aires/Aerobonus for the review sample and IPMS-USA for the chance to review it. Please keep these kinds of sets coming!