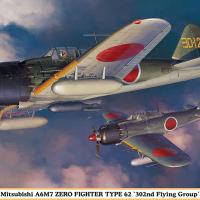 The Mitsubishi ‘Zero’ fighter was Japan’s premiere fighter at the beginning of World War II. By the time the A6M7 Type 62 appeared, the airplane had been outclassed by American fighters and in the waning months of the war, they were used in Kamikaze attacks primarily against U.S. Navy ships.

Hasegawa has done an excellent job of reproducing this aircraft. There are plenty of details provided, and nice touches such as the tape over the rivets on the fabric flight controls are there. The kit comes with a total of 147 pieces molded in a light grey and clear plastic. The fit of the parts is excellent, and I needed just a minimum of filler putty on several joints.

Starting with the cockpit, there is an abundance of details, and the cockpit would take super detailing well. The cockpit alone has 27 separate parts and uses a decal sheet to represent the instrument faces – using an instrument panel with raised dial faces. The effect is very realistic when the decals are dry and drops of clear gloss paint are used on the faces. I left the pilot and seat cushions out of my model to show the detailing better. There are 5 separate pieces for the gunsight alone! The seat cushions are molded in a separate color. One of the neatest details of the cockpit is that the pilot comes with three separate heads, an excellent detail especially if the modeler chooses to show the kit in an inflight condition.

The engine assembly contains 13 parts total, and it would take additional details very well. The cowl over the engine is a single piece and can be left off to show off all of the engine’s details. Some of the details that are separately molded are the pushrods and exhaust stacks for both the front and rear cylinder rows, details that are covered by the cowl assembly if built straight from the box. There are two separate cowl flap parts, one to represent the flaps closed, and the second one has the cowl flaps open.

Overall, this extremely well-fitting kit is a great representation of the “Zero” fighter of World War II fame. I highly recommend this kit.