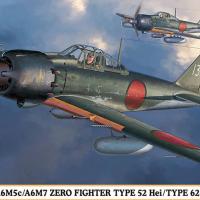 The Mitsubishi A6M7 Type 0, according to Wikipedia, is based on the A6M6, which in turn is based on the A6M5c. The bottom line for this variant of the venerable Zero is that it was designed for a role as a fighter bomber. It was fitted with 3 - 13.2mm Machine guns (1 in the fuselage and 2 wing mounted) as well as 2 wing mounted 20mm canons. Additionally, it has hard points to carry various combinations of external bombs and or external fuel tanks.

This release of the A6M Zero by Hasegawa is based on the 1994 tooling that has been used in the past for other sub-variants of the late model Zero fighter. Don’t let the age of the tool fool you, this is a superb kit. This kit allows the builder to choose from one of three aircraft: one A6M5c Type 52 Hei or one of two A6M7 Type 62s. You will want to make the choice of variant to build up front. Several of the steps are identified with an option based on the model you are building. The obvious build options include an alternate lower wing skin, the central wing hard point and the cockpit instrument panel. Likewise, when building the Type 62 (A6M7) you have the choice of what hangs underneath the wings (fuel tanks and or bombs).

As I said, this kit has been around awhile and was for the most part a complete joy to build. With a couple of exceptions, the kit fits together like a dream. On my example, I found the upper fuse part just forward of the cockpit didn’t fit as perfectly as I would have expected. A small amount of putty and some sanding took care of that issue. Likewise, the lower wing skin was not quite as thick at the center section trailing edge where it feathers back into the lower fuselage. After comparing this part with the A6M5c lower wing part, I noticed had a slightly thicker edge on the *M5c part that I quickly replicated on the A6M7 wing skin. In layman’s terms, I added a small shim and it fit just fine. Lastly, I found the landing gear receptacles on the A6M7 wing skin to be oversized allowing the gear to move around like a 5 speed stick shifter. Again, a simple fix, thicker glue, and we were back in business.

Like my previous review of the Hasegawa Emily, the decals in this kit were thin and easy to manage. Hot water is the key! The decals laid down just fine with a little MicroSet and then Micro-Sol that allowed them to snuggle into the panel lines just fine. For truth in advertising, I painted on my Hinomaru(s) just because it is how I normally handle Japanese aircraft. The remainder of the markings are 100% kit decals that included the tail markings, wing walk boundaries, and aircraft specification decals.

One of Three Aircraft from the 131 Naval Air Corps Battle No. 901 Squadron

The bottom line is that this is a very fine kit to build and I look forward to building the rest of the series from Hasegawa.

I’d like to thank Hasegawa Corporation and Hasegawa USA for providing this very fine kit for review and the IPMS USA for allowing me to review it.