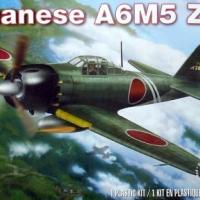 Manufactured by Mitsubishi Heavy Industries, the A6M5 Zero was a long range fighter aircraft flown by the Imperial Japanese Naval Air Service. Its first flight was on April 1st 1939 and entered service on July 1st 1940. More than ten thousand Zero aircraft were built.

Revell brings us another easy and fun to build kit. Being a skill level 2 kit, detail is a bit sparse in the cockpit department. It consists of only a pilot figure and a decaled instrument panel. Regardless, of the lean detail, this is a great little kit. The Zero is moulded in grey, and panel lines and detair are raised.

The kit went together nicely, and the fit of all parts were very precise. Other than some very minor "flash"on a few of the parts, the only predicament I encountered were the 4 small locating tabs on the bottom of the canopy. These locating tabes had to be removed to ensure the canopy had a flush fit with the fuselage.

The decals are crisp and bright, and were applied using decal setting solution to achieve a painted on look, even with the raised rivet and panel line details.

Assembly took between five and six hours broken up over the course of a week. I would highly recommend this kit to someone in the early stages of model building, and it would also make a great parent/child build.

I would like to extend my thanks and gratitude to Revell Inc, and IPMS USA for the privilege of reviewing this great little kit. Model on!