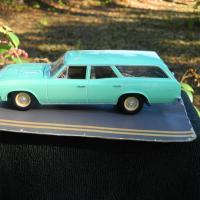 I let everything dry over night before sending the MMP-134 Surf Green paint through the airbrush. I immediately saw that I was going to have an issue with coverage. I allowed 30 minutes between coats and after 4 coats I decided to quit. The MMP was not coving the raised portions on the fenders, hood and roof. I didn’t feel like stripping the paint off so I just covered everything with Nason 2-part clear and was done.