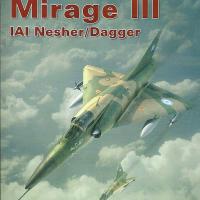 Casemate Publishers bring us a book from Polish editorial Kagero, covering the IAI Nesher / Dagger/Finger. The book was written by Salvador Mafé Huertas and his dedication and passion for the topic transpires in each page.

A little bit of history in the airframe names: The Israelis named Nesher to their Mirage V. When transferred to Argentina - with some electronic changes- they were renamed “Daggers”. After the Falklands War, almost all the Daggers were upgraded to have an electronic package like the Kfir and renamed again as “Fingers”. In Argentina, the Daggers and Fingers (an also ‘Maras’) often were referred to as “Mirages” or member of the Mirage family.

The breakdown of the sections is logical, although the order in which they are presented might be a tad confusing, as the 3rd section covers the postwar, while the 8th to 10th cover the Falklands war. As a plus, you get a section on the Israeli Aces and even one about the Mirage IIIE in Spanish service.

As a native Spanish speaker, I can tell you that the real -and only- letdown of the book is the translation. Clearly it was done by an automated system (think of “google translate”) with no copy editing of the text. Among the automated translation issues

I guess that the phrase “Traduttore, traditore”, truly applies in this case, with the lack of copy editing being Kagero’s fault. I feel truly disappointed at Kagero’s lack of quality control in the translation, as the sections that are were (by luck) properly translated have an incredible amount of information.

The author’s dedication to this book is outstanding as he collected hundreds of photographs, poured over dozens of historical documents and interviewed dozens of former pilots, technicians and engineers.

If you want to focus on the pictures and their captions, you can learn a lot about the history of the Dagger (and later Finger) in Argentinean service from this book. Probably most than from any other book. The trouble is that seeing those pictures and reading the captions will leave you thirsty for more and the translation might not be good enough to quench your thirst.

I would like to thank Casemate Publishers and IPMS/USA for the review sample.