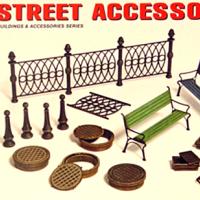 MiniArt Models, your favorite Ukrainian diorama manufacturer, has come out with an accessory kit for their street dioramas, cleverly called Street Accessories, #35530. 44 injected plastic parts are provided on four sprues that will build into two benches, four manhole covers, four grates, a 5 inch section of metal fencing and support poles. In addition, there are four short pieces that look like chess pawns but may be hitching posts or barriers of some sort. The instructions are on the bottom of the box and the only color choice provided is on the box top, but truly you’ll use your imagination to paint and finish these parts to your liking anyway. One nice thing, these parts are not really dated by their design, so could be present from the turn of the 20th century till the mid-50 at least.

In less than an hour I had the parts off the sprues, cleaned up and glued together. One’s biggest decision is how to place these items on your existing street scene. In my case I decided to use the MiniArt Street section w/tram lines (#36040) and place one manhole cover and two grates into the existing model. I used my trusty Dremel tool to route out the plastic and some wood for the manhole cover rim to fit in. Because of the way I made this street scene I cut off the length of plastic below the rim so I did not have to make a deep hole.

The grates were done in a similar manner, mark their location, route out the plastic/wood, trim the grates to their rims and place in the holes. I mixed up some two part epoxy and used that to glue in there parts.

I can highly recommend this kit to add a little zip to your street model, true the armor model will be the real focus but it’s nice to have a little extra detail in the background. I want to thank IPMS/USA and Dragon-USA for the opportunity to review this product.