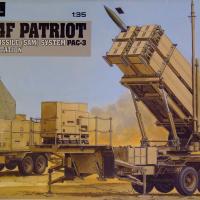 What's in the Huge Box

When I opened the box I was impressed with the numbers of sprues. At first glance it did not appear that this was going to be too difficult of a build. However, I later discovered that my assumption was incorrect. There are a lot of parts to put together, and you must be ready to devote some time into this model because it will take a while to complete. With that said, let's get on with the good stuff. Here is a breakdown of the items in the huge box.

(An interesting note. This kit has no photo etch parts. You will also have a ton of leftover parts in the kit which all look like the belong to the HEMTT. The question is why did Dragon not release the HEMMT with this kit?)

The MIM-104 Patriot is a surface to air missile system, used by the United States Army and several allied nations. It is manufactured by Raytheon. and derives its name from the radar component of the weapon system. The AN/MPQ-53 is known as the "Phased Array Tracking Radar to Intercept On Target" hence the name PATRIOT. The Patriot System replaced Nike Hercules system as well as the MIM-23 HAWK system in the role of the U.S. Army's Air Defense Additionally, Patriot has been given the function of the U.S. Army's Anti Ballistic Missile system, which is now Patriot's primary mission.

I use several types of cements, most notably Tamiya Thin Liquid cement and Testors Model Master liquid cement in the black dispenser bottle with the syringe type applicator.

The paints used on this model were primarily Mig Ammo paints, Mig Abtelieng Oils and Mig Pigments for the sand fade. I find that I truly like their color selection and durability of and find myself using them more and more.

I have to admit that even though I was not entirely happy with the grating issue, the kit does build up onto a very good looking model. It has a lot of detail and looks mighty impressive when built. It was not easy to build, but I am happy with the time and effort I put into it

I primed all the subassemblies with black and allowed it all to dry overnight. The model was then given several mist coats of Mig U.S. Modern Vehicles 025 Tan, followed with a panel fade (cloudy overspray) of the same color lightened with about 25% of Mig 050 Flat White. I then hand painted all the lights with appropriate colors. The tires were painted Mig Rubber Tires 033, which is not black but rather a dark grey, and in my opinion it looks a lot more like rubber than flat black.

The model was given a few light coats of Pledge floor polish to give a nice glossy finish for the decals to adhere to, and once dry, the decals were added. After settling down the decals with Gunze Mr. Mark Softener, another coat of Pledge was sprayed over the model to seal in the decals.

I really enjoyed building this model and would recommend this to anyone wanting to build a nice Patriot. The detail level is very good and the overall finished model is nice.

I would also like to thank Dragon Models and the IPMS reviewers corps for giving me this opportunity to build this wonderful kit. Should you choose to build one, you can obtain this kit from the Dragon website at http://www.dragonusaonline.com Simply place kit number 3563 in the search box and bam, there you have it. The actual kit number is DRA-3563. Model on!!!!

Right side view, above

Zoom in on missle boxes