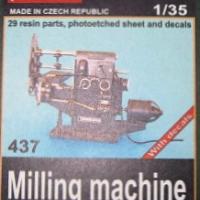 Another awesome kit from Plus Models is a milling machine which would fit in many dioramas such as an auto or machine shop. The kit is a true multimedia kit with 29 resin parts, a photo etch fret, a length of wire and decals to make a duplicate of a LeBlond No. 3 Plain Milling Machine. The parts are perfectly cast and the photoetch is nicely engraved. The decals represent the metallic plates on the machine and are excellent also.

Construction involves removing a lot of casting gates. This is true for all parts except the sprue that have the handles. Once the gates are removed, I added the motor and main arm to the base. I also added the controls and electrical boxes and the main arms and the end guard. I left off tray and adjustment guide as they can be added later. The main drive belt guard was also added. I also made the mistake of adding the tiny handles to all of the arms. More on that later. I also assembled the parts for the tray and adjustment guides.

Looking at my paints, the real machine looked very close to FS 36116, Gunship Gray so that was what I used. I used Citadel Mithril Silver and hand painted the handles, dials and various arms as a basecoat. I painted the metal parts of the motor copper. I touched up some misses and added the decals. I added some washes and flat coated the entire thing.

During all this handling, I knocked off at least four of the handles. Hindsight, I should have left them off and added later. Once all the fixes were done and the tray and adjustment guides added, I flat coated the entire thing again. I used a silver pencil to add some scratches. Last, I used a silver paint marker to shine up the moving parts and its done.

This is a very cool little kit and would make a great addition to any diorama. Definitely recommended. My thanks to Plus Models and IPMS/USA for the chance to review this great kit.