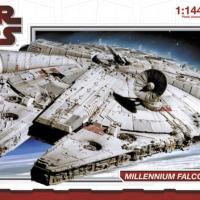 Yes, I love Star Wars- I have since I saw the first movie in a theater when it came out in 1977 (yikes). In 2001, Finemolds and their president Kunihiro Suzuki starting issuing intricately detailed and very well researched replicas of the craft from Star Wars. They jumped through X-Wings, Tie Fighters, and topped it off with the 2006 release of the 1/72 Millennium Falcon. This kit, which is currently OOP, had a massive parts count of 900 and detail that makes it one of the best kits of all time. The kit cost well over $200 when released (I know, as I am one of the guys that bought one). Last I saw, the collector price was pushing $300. These are expensive, long projects to build but in the end one is rewarded with a stunning replica. They are also now hard to come by except for E-Bay. This leaves us humans in a bad way when we need to go to that galaxy far, far away.

Now to 2010. In a great move, FineMolds has released a superb 1/144 Falcon with a very reasonable price of about $52 through HobbyLink Japan. The first thing that hits you when you open the kit is that the detail on panels and parts is amazing for a 1/144 scale kit. FineMolds makes Star Wars kits with a passion and devotion rarely seen anymore in modeling.
The kit comes with around 100 parts, including clear parts for the cockpit and the gun seats. A base is also included, and the landing gear can be shown extended or retracted. The top and bottom are large one piece moldings with excellent detail. A great set of instructions, a two-part painting guide, paint masks, and decals round out the kit.

The first steps start like any aircraft with the cockpit. It is a simple, as expected in 1/144 scale, but there is room for detailing and painting- even lighting. The finished cockpit is added to the side pod and the radar and gun stations are next. Masks are provided with the kit. You have to cut them out and they are OK; not as nice as the tape-style Eduard masks, but they are still helpful. I used a straightedge to trim mine. Masks are also provided for the gun stations and cockpit. Step 5 has you assemble all 7 legs- you can skip this if you elect to do an in-flight version and use the stand.

The next 5 steps are preparation for closing the hull halves. This is done by adding all the side panels and cut outs. FineMolds elected to mold all the recessed areas as separate parts and it pays off, looking much nicer than molded in ones. I thought about gluing the hull halves and then adding the sides but this won't work well for all panels as there is some overhang. I followed the instructions and the fit was excellent. As a matter of fact, I used a little putty on the cockpit pod, some white glue after attaching it, and that was it. Once the halves are together you add the sides, cockpit pod, gun stations and landing gear and radar to the top and you are done. I did add one small piece of strip at the back over the engines. There was a slight gap and it I covered it since putty would have been impossible to get in the area needing attention.

Now for the really fun part- painting. This kit is a painter's dream. The whole assembly process took about three evenings and a morning, and the result was seam free and ready for paint. The kit was preshaded using black for the panel lines and miscellaneous areas. It was then given its' overall light gray color (FS36495) and sealed wit two coats of Alclad clear in prep for decals and weathering. You have two choices here- the instructions show where all the worn looking colored decals go and they apply well. There is also a set of instructions with a color reference for the "expert modeler" with correct color call outs for the panels in question which enhances the look. The choice is up to the modeler and I went with decals. Once done, I used the light gray to dull down the decal color. I added pin washes to panels and lines and certain areas with a mixture of water colors, dish soap and water. I flat coated that and went to the pastels and a final flat coat to the finish. The masks were removed and the small amounts of bleedthrough was cleaned up with a toothpick.

To say this is a recommended kit is way short of reality. This is a must have for SciFi fans and modelers everywhere. The fit is perfect; when done, the Falcon looks every bit a miniature of the movie prop. I am sure we will see some detailing sets, lighting sets and hopefully some masks for this- for me, this is the kit of the year, hands down. My thanks to Mr. Suzuki of FineMolds and Scott Hards of HobbyLink Japan for such a fine kit- buy one now and have a blast building it!