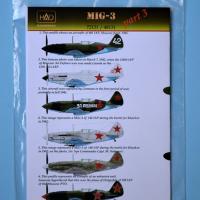 HAD Models is a Hungarian company that manufactures decals and distributes aftermarket detail parts. A visit to their website shows that their decal sets fill some voids and provide model builders with a variety of well-documented markings (particularly Hungarian, Russian and German a/c). HAD Models’ decals are on a par with major brands: They are printed on thin decal film in vivid opaque colors. The graphics are crisp and accurately registered. Many (but not all) sets include stencil data.

Set 48131 is devoted to Soviet MiG-3s that defended the homeland in 1941 and 1942. The set provides national insignia and specific markings for seven aircraft:

No stencil data is provided in the set for these aircraft. However, it is doubtful that very many, if any, stencils would have been apparent on these aircraft because all have field applied camouflage or white wash. On the plus side, enough national insignia are provided in this set to permit the modeler to do six of the seven schemes without the need to rob the kit decals for them.

All graphics were created by Massimo Tessitori, who is responsible for the extensive MiG-3 research and artwork that can be found at https://massimotessitori.altervista.org/sovietwarplanes/pages/mig3/mig3.html. A visit to this site confirms the thorough research involved in producing this (and the previous two) MiG-3 decal set.

Although no application instructions are included on the instruction sheet, the decals should be dipped in warm water and then moved from the carrier sheet within a minute. They should be ‘floated’ onto the surface with enough water to keep them from bonding before they are positioned properly. After careful blotting, the decals should respond well to mild setting solutions (but it is advisable to test one of the unnecessary decals first to confirm how they react).

This set is highly recommended. My thanks to HAD Models for providing the review set and IPMS USA for the opportunity to review it.