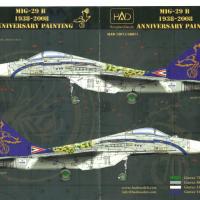 The Mikoyan MiG-29, NATO reporting name: "Fulcrum" is a jet fighter aircraft designed in the Soviet Union. Developed by the Mikoyan design bureau as an air superiority fighter during the 1970s, the MiG-29, along with the larger Sukhoi Su-27, was developed to counter new American fighters such as the McDonnell Douglas F-15 Eagle, and the General Dynamics F-16 Fighting Falcon. The MiG-29 entered service with the Soviet Air Force in 1983.

The instruction sheet is printed in a beautiful full color sheet, with appropriate colors listed for mottled grey camo and blue tail fins. The foldout shows the full profile (left and right) of the aircraft and the top camo and flat bottom. All colors in the instruction call for Gunze paints.

The decals were designed by HungAeroDecals and printed in Czech Republic by BOA Agency. They are glossy on the sheet; and seem to have very little transparent carrier film around them which for the most part should not cause silvering. The Colors are extremely bright and beautiful!

Full stencils are provided, and are in Hungarian. The Black Strip decals are the front landing gear cover decals.

I would like to thank Had Models and IPMS/USA for the review sample.