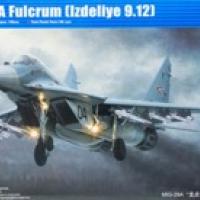 In response to the USAF’s 1970’s initiatives to launch new fighters, the F-15 and F-16, the Soviet Union fielded their own modern equivalents, the Su-27 Flanker and Mig-29 Fulcrum. All these aircraft are still in service with their respective, and other, countries. During the last twenty years, the Mig-29 has even seen service in several nations that are now part of NATO. They mostly operate as interceptors. In the plastic modeling world, the F-15, F-16, and Su-27 have been well represented in kits, but the Mig-29, not so much. Trumpeter has filled the void with a quality model of an early production version, Product 9-12, of the Fulcrum.

Typical of recent Trumpeter releases, you’ll find 179 pieces molded in light gray plastic packaged in 11 plastic bags. One bag contains a clear sprue with six parts. No flash is evident on any of pieces and the surface detail is exquisite. Trumpeter provides three external fuel tanks, a full missile load, and decals for two options: one for the Russian Air Force and the other for the Hungarian Air Force. The instructions are in an eight-page booklet which provides a parts map, exploded view assembly diagrams with 11 steps, separate decal and painting guides for the aircraft and another for the missiles. The back of the missile paint guide is a full color poster of the box art. A nice surprise is an eight-piece tow bar. If you’ve built a Trumpeter aircraft model lately, all this will be familiar.

Step 1 of the instructions has you assemble the cockpit tub and ejection seat. Detail here, in the form of decals, is adequate for 1/72 scale but would benefit with some added “fiddly bits” to enhance the 3D effect. I cut the instrument panel decal into three sections for ease of fit. The K-36 seat lacks lap belts and its prominent firing-handle in the front of the seat pan. After drilling holes in the wings for the pylons, you can close up the top and bottom fuselage halves. Fit is excellent as it is with most of the kit. I added ballast to the nose cone rather than to the fuselage as suggested in the instructions. In Step 4, make sure you glue in parts D3 and D6, landing gear bases, before adding the inner wall of the wheel wells and the intake trunks. I found out they will not fit otherwise and had to do some surgery to get them in position. All wheel wells have nice detail which benefits from a dark wash and dry-brushing. As is their want, Trumpeter has you add the landing gear and gear doors early in the construction stages. I knew I would break them off if I did, so I waited until later. Same goes for the pitot tube in the nose. The only difficulty I had with the entire kit was with the vertical (actually, they cant outward) stabilizers and their extensions which house the flare/chaff cartridges. Sanding is required to get H1 and H2 to match the contour of the aft fuselage. Also, I removed the tabs from the bottom of F2 and F5 to facilitate getting them to fit - they actually “toe-in” slightly when viewed from the front. Filler was used to blend them into the fin. The joint between the vertical stabilizers and the fuselage also needed a touch of filler.

I assembled the air-to-air missiles at different points in the build. Only the small R-73E’s need some filler and sanding to fit properly. For the final presentation, I selected a full missile load and the large center line fuel tank. I did not use the external wing tanks nor the missile “training rounds.” Pay attention to the diagrams in Step 10 because this is the only place showing which pylons match the different missiles and fuel tanks.

One thing you will notice on the wings is the position of the ailerons. Both sides are raised slightly above the plane of the wings, which is unusual. I searched the internet to confirm this configuration and did find a couple of pictures where both ailerons appeared to be above the wings. I couldn’t find a conclusive photo showing both wings clearly, so I will give Trumpeter the benefit of the doubt.

I chose to model the Hungarian version as depicted on the box cover. The guide for this step is a two-sided color sheet with the paints listed in several manufacturers’ product lines. I personally appreciate this listing as I generally use paints from several sources. The color equivalents for Mr. Hobby’s H308, the lighter gray, are way off - green rather than gray. For example, the Vallejo equivalent color is 71.050 or 990 and not the 893 called for. After priming with Alclad Grey Primer, I pre-shaded panel lines with a dark gray. For the upper and lower camouflage colors, I spayed different shades of Mr.Hobby, Vallejo, and Tamiya grays. No colors are recommended for the gear bays and the gear struts. For the former, I spayed Tamiya XF-22 RLM Grey lightened with white, while I used their XF-19 Sky Grey, also lightened with white, for the later. I missed the false cockpit on the lower fuselage and had to paint it on after the nose gear was installed. This presented some masking challenges. Later, I did some post-shading with a mix of light gray and white, to simulate the worn appearance on some areas of the machine. Photos from the internet were a great help here. One final note, I painted the cockpit with the Soviet era turquoise color, but later internet photos indicate it should be more of a light blue/gray.

For decal prep, I sprayed the model with Johnson Pledge with Future.

The decals are excellent. They are opaque and settled into panel lines nicely with Micro-Set and Sol. There are numerous stencil markings for the aircraft which took quite a while to complete. The missiles have their own decal sheet and guide with lots of stenciling here, too.

Finally, I painted the tow bar orange rather than gray. I found a few photos of Russian tow bars for various aircraft and they were all orange.

I would highly recommend the Trumpeter kit to most modelers. It’s not, however, a model for the complete novice due to the high part count with many of them tiny and delicate. Is this Fulcrum kit perfect – almost. Several aerials and probes are missing as well as the faded orange/red seal around the canopy - I added my own with decals. That said, I think it’s the best 1/72 Mig-29A on the market. I’m eagerly looking forward to Trumpeter’s release of the SMT, late model version, as well as the two-seater. Thanks go the Stevens International for providing the kit and to IPMS for letting me do the review.

Tow Bar and Missiles
Previous Next