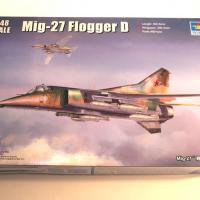 The Mikoyan MiG-27 (NATO reporting name "Flogger-D/J") is a variable-geometry ground-attack aircraft, originally built by the Mikoyan design bureau in the Soviet Union and later license-produced in India by Hindustan Aeronautics as the Bahadur ("Valiant"). It is based on the Mikoyan-Gurevich MiG-23 fighter aircraft, but optimized for air-to-ground attack. Unlike the MiG-23, the MiG-27 did not see widespread use outside Russia, as most countries opted for the MiG-23BN and Sukhoi Su-22 instead. It remains in service with the Indian, Kazakh and Sri Lankan Air Forces in the ground attack role. All Russian and Ukrainian MiG-27s have been retired.

Trumpeter, a Chinese maker of scale model kits, produces the kit. The kit arrives in a very colorful box with artwork of a Mig-27 Flogger D displayed in level flight. The box sides show the four decal options.

The kit consists of approximately 480 parts and comes on ten grey sprues, two clear sprues for the canopy, four grey sprues for the weapons, and one photo etch sprue for the seat belts and finer details for the cockpit and external features. The parts are nicely molded, with no flash, fine panel lines, and small sprue gates. The 16 page instruction sheet show the suggested assembly through 25 steps starting with the cockpit assembly and progressing through fuselage, assembly of wings and tail planes to fuselage, and final parts assembly. As part of the 16 pages there are 3 pages of weapons assembly shown in 20 steps for the 14 weapons options! This kit has loads of weapons options!

The kit fits together very nicely! There are positive assembly locators on all of the parts but care must still be taken when gluing the parts together. The first step is the assembly of the ejection seat and the addition of the PE seat belts. They look great when finished. The cockpit instrument panels consist of decals. To use the side instrument decal panels I had would have had to remove the premolded cockpit details and lay the decals. I decided to keep the instrument side panel details and to just highlight them. After painting and dry brushing the panels looked great. Next the cockpit tub is installed in one half of the fuselage as well as the engine and engine intakes. The fuselage is then glued together. Next the wings and fuselage top half are assembled and then attached. Next the fin is assembled and attached to the fuselage. The nose cone is then assembled and attached to finish the fuselage assembly. I found that the nose cone was a couple of millimeters too wide when mated to the fuselage. I had to disassemble the nose cone and thin the halves down to remove the extra width. If I were to build this aircraft kit again I would attach each side of the nose cone to the corresponding fuselage half first so as to get a smooth fit. Last are the landing gear, canopy, and ordinance. There are no masks provided for the canopy, which would have been a nice option as well. While some of the weapons options show which hard points to use, some do not show any hard point use at all. There is a very nice head on view of the aircraft on page 16 step 46 showing where the different weapons would normally be carried.

There are very nice painting and marking guides provided for both the 4 paint scheme/decal options and the 14 weapons and weapon hard points. I chose to do option A (there are no explanations for the 4 decal options). The paint guides give the color specifications for Mr. Hobby, Vallejo, Model Master, Tamiya, and Humbrol paints. I choose to use the Model Master paints.

I then used chalk pastels to highlight the fine detail of the panel lines in the fuselage, wing, rudder, and elevator.

There are 4 decal options that are shown on the painting and marking guide for aircraft numbers 30, 24, 05, and 09. The guide shows a layout of the options with the aircraft in left, right, and top giving locations of the decals and stencils. The decal sheet is nicely printed, thin and was printed within register and I had no silvering problems. But I did find the decals to be a little brittle.

Overall the kit is a joy to build and builds into a nice Mig-27 Flogger D aircraft. The fine panel lines and the detail are exceptional for a kit of this scale.

My thanks to Stevens International, Trumpeter, and IPMS USA for the opportunity to build this kit. I look forward to building more Trumpeter kits in the future.