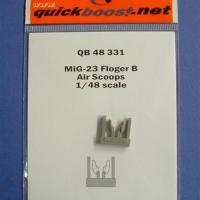 Like most Soviet aircraft of their era, the Mig-23 and Mig-27 have dorsal air scoops over the engine compartment to provide auxiliary cooling. These are large scoops and are quite noticeable on the real plane. The only 1/48 scale kit of these aircraft is the 1980's era Italeri (ex-ESCI) kit, and ESCI broke out from most of the kits of the era and molded the scoops open. While this is better than many kits, the opening is simplistic, it is molded in two halves so there is a seam to clean up, and the scoop is not quite right in shape. Quickboost again steps in with another simple aftermarket set to correct these deficiencies. Rendered in resin are two crisply cast and highly detailed replacement scoops. The shape and detail is superb; it even captures the splitter plate inside! Installation is easy, just cut from the block and attach to the airframe. I continue to be impressed by Quickboost’s quality and range of offerings; they offer details rarely seen in the market before. For builders of Soviet era aircraft, this small detail will save time and be a nice enhancement. Since the Mig-23 and Mig-27 have the same scoops and theses parts are the same between the ESCI kits, the parts can be used on either model despite the package title. Highly recommended.

P.S. I do like the typographical error on the packaging!

Close up of the scoops

Comparison of kit parts and QB scoops
Previous Next