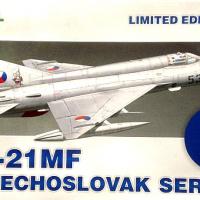 The MiG-21 Fishbed followed the series of jets that began with the MiG-15. It possessed the same characteristics as its predecessors. It was small, agile, and fast. Its maximum speed was 1,385 mph, range was 981 miles, and service ceiling was 62,335 ft. It was also a simple aircraft, making it reliable and easy to maintain. These attributes combined to make the MiG-21 the most-produced supersonic aircraft in aviation history with over 11,400 manufactured worldwide. It has seen service in over 45 countries across Eastern Europe, Asia, Africa and South America. Some countries are still flying the MiG-21. Many variants were produced between 1959, when it was first introduced, and 1985, when production ended. The subject of this review is the MiG-21MF/MFN – "M" for "modernized", "F" for "upgraded engines", and "N" is the Czech Air Force designation for MiG-21MF upgraded with NATO standard avionics.

Eduard's Special Edition MiG-21MF/MFN in Czechoslovak Service is a beautiful and thoroughly outfitted kit containing many extras. However, to build the kit utilizing all the extra details is not for the impatient, faint of heart, or novice. This is a kit for the seriously committed builder.

Upon opening the box, you will immediately notice all the details that go into this beautiful kit. The 28-page color instruction booklet is thoroughly illustrated. Included in the kit are eight dark gray sprues and one clear sprue. Mold lines, flashing, and ejector pin marks are all but non-existent. There are two frets of photo etch parts, one of which one is colored. In addition, two small sets of masks to help with painting the detail are provided. There are four sheets of decals for the marking options of the twelve different aircraft available. One sheet contains literally hundreds of stencil markings. In addition, Eduard has included a set of Brassin UB-16 Rocket Pods. An extra bonus found in the kit is a 16.5" x 11.5" poster by Pavel Rampír depicting a couple of Czech MiG-21MFs, one of which is aircraft No. 5303. Another bonus is the small lapel pin of the Eduard Knight –the same one that appeared on the fin of MiG-21MF 5303.

Before starting construction, it is imperative that the builder decides which of the twelve aircraft to model. Each aircraft is assigned a code letter. Not all aircraft have the same parts. Throughout the instructions, code letters are provide to distinguish which aircraft gets which part. For example, in step 1, aircraft coded A,C,E,F,H,J, and K get part G20. Aircraft B,D,G,L,M, and N get part G4, a similar but different part. Please go through the instructions and mark the aircraft code you have selected.

Construction starts with the nose wheel well/cockpit. This is one area where different aircraft have different parts – e.g., switches, instruments, and "little black boxes". The colored PE parts really add pop to the cockpit. I'm sorry to report that my photo etch skills did not allow me to place the full complement of PE on the model. There may be some difficulty in finding a color for the rest of the cockpit that matches the photo etch color. I used Model Master’s 2135, Interior Blue/Green. It’s off-color a little, but with a closed cockpit it may not be too noticeable.

The next few steps include building the parts that fit between the fuselage halves – the afterburner tube, the center body/main wheel wells, and the side consoles. The detail here is excellent as well. The flame holder on the afterburner tube uses a styrene part and two PE parts. However, it is so far up the tube that it will never be seen without a flashlight. The molded main wheel wells in the center body have a few additional parts added that result in excellent detail. The cockpit side consoles are also built up at this time. Again, different aircraft get different parts, so be careful with the PE.

With these subassemblies completed, it's time to place them in the fuselage. Besides the subassemblies, there are three solid frame members and the nosecone to be set. There is a note to add weight inside the nosecone, but no quantity is given. I filled the nose cone with birdshot and white glue. That was enough to prevent a tail setter. The vertical stabilizer is constructed and, along with the dorsal spine, is set in place.

Our attention now turns to the lower wing. The dive brakes come molded in the closed position. If you want them in the open position, simply cut along the cut lines, remove them, set the air brake interiors in place, and add the brakes back in the open position. Now is the time to decide which of the various weapons/fuel tank configurations you will use. On page 13 of the instructions, Eduard has provided a full menu of these items. There are two types of fuel tanks and ten different rockets or bombs that can be added. With this menu it is easy to decide which item goes where. Once the munitions load has been determined, drill the holes in the lower wing for attaching the hard points.

The completed lower wing is now added to the fuselage, along with the horizontal stabilizers. The upper wings are added next. These fit so tightly that only a smidgen of filler was needed. All control surfaces – wings and vertical stabilizer – can now be set in deflected positions.

To finish the construction, the landing gear is built up and added. As happened throughout the build, more small fins, inlets, bumps, knobs, and protuberances are added. One of the last items to build is the ejection seat. This is no small task for such a relatively small item. There are 15 plastic parts, 17 pieces of PE, and two decals that make up the ejection seat. When completed, it looks great! Once the ejection seat is in place, the canopy with its ten pieces of PE is added.

Painting and decaling any of the twelve aircraft is not a problem with the beautiful color four-view pictures provided for each aircraft. A small block of text accompanies each aircraft, providing a short history of that particular aircraft. Of the twelve, there are five aircraft with some form of camouflage pattern. I selected the light gray/dark gray tiger motif of the 41st FS at Caslav Air Base. A separate four-view drawing shows the location of all stencils. Decal and paint callouts are clearly shown. The paint callouts refer to Aqueous and Mr. Color.

This is certainly one of the most detailed aircraft models I've ever built and I am sorry to say that I did not do it justice. The parts fit is great and the instructions were clear and concise. However, I cannot recommend this kit for the beginner. An intermediate builder may struggle with it at times but will end up with a nice looking model. In the hands of an experience builder, this kit can result in a beautiful work of art. It is to the last group that I highly recommend this kit. You will certainly enjoy it.

I’d like to thank Eduard for the sample kit and IPMS/USA for giving me the opportunity to build and review it.