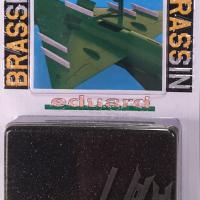 This is another resin set that Eduard released to upgrade its new MiG-21MF kit. The set provides the five base pylons for the MiG-21, two for each wing and one for the centerline station. The pylons are drop-in replacements for the kit parts and require the same holes to be drilled out as the kit pylons do, so no additional work is required to use them.

In reviewing the kit’s instruction sheet, it states that for the outer pylons, there is a difference between the ones used when weapons are mounted and the one used when fuel tanks are mounted on the outer wing stations. The set does not say whether the set’s outer pylons (parts R4 and R5) are weapons or fuel tank pylons, so I checked the instructions for Eduard’s R-3S missiles and pylons set (#672 18). This set also lists parts R4 and R5 as being used for the outside pylons to which the missile rails are attached, therefore I assume that the ones included in set 672 184 are also weapons pylons, not fuel tank pylons.

As shown in the photographs, I did not install the centerline pylon on my kit. I did this as I planned on displaying the aircraft with the large ventral speed brake open and I did not want the pylon to interfere with this. You will also note that I installed a set of Eduard’s R-3S “Atoll” missiles on the model, so I attached the weapons rails to the pylons. To do so I drilled two small holes in each pylon to match the pins on the weapons rails to ensure a solid fit.

In the rush to keep thing moving, I glued the pylons to the kit before painting, but after knocking them off several times, in the future I will paint and decal the pylons separate from the kit as it will make things a lot easier.

Air to Air missiles in place on pylons
Previous Next