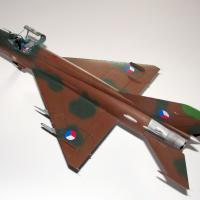 Eduard re-released the very nice Mig-21MF kit in an awesome dual combo box of the MF in Czech and Czechoslovak service (39 marking options!) and with it they also released the overtrees of the kit and the Photo Etch (P/E) set (for an additional $14.95 - price above is only for the kit). If you have the Dual kit or even the older Profipack kit the overtrees are a nice and inexpensive way to add another kit. You get all of the plastic that comes with the kit but no instructions (No problem as Eduard has them on their web site) or decals (Again no problem as the Profipack and dual kit have many extras). As far as the interior goes, no problem, you can still get Eduard P/E for the early or late variants.

The plastic is grey in color, molded well with little to no flash and no noticeable sink marks. The clear parts are also very nice and extremely clear. The P/E set for this boxing deals mainly with the cockpit but there are a few other items also (For the landing gear, antennas, air boom, static dischargers, etc, etc.)

I have the Profipack kit of the MF and what a fantastic kit this is. Out of box it’s the most detailed kit I have built and with 430+ parts it is a bit labor intensive (It’s even worse... I mean more fun when you add the P/E). This new boxing is the same as the old but the P/E is upgraded by quite a bit. Since I also picked up the P/E for review I had to print the instructions for the new release as there are BIG differences between the two.

This kit goes together well but there is a very small bit of flash that, because of the tight fit of this kit, needs to be removed or you’ll have some problems. The instructions are the same as the Profipack kit and you start with the interior (Wheel bays, cockpit, engine, intake with lots of room for weights & bulkheads) and it’s all pretty simple but there are many parts. The original Profipack kits control panel (If you use the P/E) is made up of 8 parts while the new release has a panel made up of 20 parts... UGH! The cockpit is similarly upgraded as the Profipack kit has 21 parts while the new release has 30, needless to say there is a lot of detail in the pit! Everything went together well and once all of these sub-assemblies are finished it’s time to put the fuselage halves together and then add the spine & tail.

Next up is the main wing with quite a few pieces to add and holes to drill out (DON’T FORGET THESE!) and you have to choose whether you want the brakes opened up or not (I decided no surgery for me!). After that was finished it was time to add the main wheel bay and lower half of the main wing & stabilizers to the fuselage, again everything fit perfectly. Once these were set I added the upper half of the main wing and ailerons/flaps. I did have one small gap at the wing root but a little stretched sprue fixed it right up. One small problem I had is the wing fences as they went on nice and easy (You have a choice of plastic or P/E) but make it a bit hard to handle the model without knocking them off later.

Once the wings are done it’s time for the underside and its many parts (Heck, each landing strut alone is made up of 10 parts!) The tough area here was the retraction strut and if you put the P/E parts #60 & 61 on each strut wrong, even by a little, it’s going to make adding the retraction strut hard. Not counting the struts there are over 20 parts for the underside and I’m not going to kid you...it made picking the kit up a small pain in the behind trying not to knock parts off.

Next up is the seat... and what a seat! With the P/E, 34 parts + 2 decals make up the seat. Once this is together it slides right into the pit. After this you can add the windscreen & canopy (There are up 10 P/E parts and two decals to add to the inside of the canopy), dynamic pressure probe, air data boom (The boom has 4 very small P/E Yaw Vanes to add to it….OH JOY), IFF antennas and the oh so small, why do I bother, static dischargers (5 of those bad boys). You’re probably asking why I wrote “why do I bother” right? Well, it’s because I managed to knock those off MANY times, even while taking the pictures!

The only cons of this kit I can think of are:

Since I have two of these to build I decided to do this one in the markings of a Czechoslovak People's Army bird (9th fighter Squadron, Bechyne AB, Czechoslovakia, 1989-1993) and the next one will be a Polish Air force version (I love both of these schemes!). BTW...Yes, I left the ordnance off as I think it kills the look of the aircraft... sorry.

This is an absolutely awesome kit and I highly recommend this to anyone with experience.

I would like to thank Eduard for supplying these, the review corps for letting me build this and all of you for reading this. Happy modelling!!

Contents of the box

Detail of tail showing antenna and static discharger
Previous Next