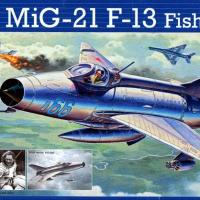 The MiG-21 FISHBED has been the backbone of numerous air forces throughout the world. Recently, in the modeling community, we have been blessed with many variants of the MiG-21 from multiple manufacturers. This review covers the new release of the 1/72nd Revell of Germany MiG-21F-13 FISHBED C. This kit was previous released by Revell of Germany in 2005. Since the first release, it’s become relatively non-existent. However, that has now all changed with this new release! The only difference between the 2005 and 2015 releases are the decals (there were far more options and stencils in 2005).

The Revell FISHBED C comes in the standard Revell end-opening blue box. Inside are three sprues of silver-grey plastic, one sprue of clear plastic, and decals. The parts count is relatively low, but that does not mean the detail is lacking. There are some panel lines that may need re-scribed as they just stop before meeting the next panel line. This was evident on the fuselage area only. Also, there are a few panel lines missing on the vertical stabilizer, but these are not so prominent that you must scribe them. In fact, unless you had carnal knowledge of the FISHBED C or had references at hand, you wouldn’t even know the panel lines were missing. Overall, Revell’s efforts on the panel lines and rivet detail is nicely done.

I built this kit when it was first released in 2005. At that time, my knowledge of the FISHBED and modeling skills were limited. However, that build prepped me for this review. I will highlight some areas that need attention and hopefully show them in the photos. To start, the cockpit is really well done. The seat has some spurious harness detail and the instructions would have you bend the top of the seat down. This “flap” on top of the seat is actually raised up when the canopy is open—keep that in mind if you wish to build it canopy open. There is also a slight curve up in this part on the real jet. I chose to use the kit’s instrument panel decal on the instrument panel. I am extremely satisfied with the result. The sizing was near perfect and with some Micro-set/Micro-sol it snuggled down nicely! There is a raised “wire” on the back deck of the cockpit. This is actually a fuel line and should be more round than Revell depicts it, but with careful painting it looks acceptable. For my cockpit, I used Vallejo Model Air Barley Grey. Check your references as most F-13s started out with a black cockpit and was repainted grey at some maintenance point in its life. The FISHBED C almost certainly did not have the Russian turquoise green cockpit.

Moving from the cockpit, the rest of the build is pretty straightforward. Here are some areas to watch out for. First off, the display model on the box shows the afterburner outside of the fuselage. This is wrong, and if you follow the instructions, you’ll be ok. If you plan to pose the speed brakes closed, be prepared to do some extra trimming to get them to fit properly. The instructions have you mount part 25 on backwards.

The kit nose cone is slightly misshapen. One of the main issues is that there are four supports that hold the radome inside the nose cone. On the real FISHBED C, there are only two supports. Pavla makes a resin nose correction. I used that in this build, but if you choose to do the same, the diameter of the resin part is smaller than the diameter of the kit fuselage. A small shim will need to be added to the resin nose.

The only area on my model that required some filler was the bottom of the wing-to-fuselage joint. It’s an awkward area to fill and sand though.

Since I was doing a late East German FISHBED C, I had to combine decals from the 2005 release and this new release. My model depicts Red 639, which was used in a reconnaissance role. I used Vallejo Model Air paints and Ammo by Mig panel line washes.

All that was left was adding the various antennas and landing gear. There are two things to watch out for. First, I would recommend gluing the nose gear doors in place before adding the nose gear. Second, the main landing gear doors need slight modification. Parts 39 and 41 need slight trimming from the area that meets the wing. If this is not done, the door hangs down too far. I chose not to hang anything from my FISHBED. Typically, late East German FISHBED C would be used in a reconnaissance role and if anything, would carry AA-2 ATOLL missiles. However, the Revell kit does not include AA-2s and the kit’s centerline fuel tank fins are misshapen, they are too broad and rounded.

Despite the minor (in my opinion) shortcomings of this kit, it really is the best FISHBED C in the one true scale. It practically falls together and was a real treat to build. If you have any interest in MiG-21s, then you definitely need a FISHBED C in your collection. Thanks to Revell for providing the kit and for IPMS/USA for allowing me to review it.