MiG-21bis Around the World (Limited Edition) 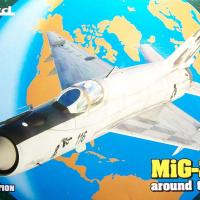 Eduard has released a limited edition of their great Mig-21 kit. This time the bis version used by other countries with marking for seven different air forces that used the aircraft.

While you get 8 sprues, you also get plenty of unused (spare) parts. All the sprues are extremely well molded with very little flash and great detail. The decals allow you to finish the aircraft in 7 different versions and are printed by Cartograf.

First is the construction of the cockpit area starting with the front wheel well as it’s attached to the bottom of the cockpit floor. You have to select which version of the aircraft you are going to build as there are variations of the instrument panel. I selected the aircraft featured in the box art, version A, a Croatian Mig-21 bisD. You can use decals or PE for the instrument panel. The PE is excellent and that’s the way I recommend. The only issue here is the matching the color of the PE interior green. I used the Mig Ammo color which is greener but looks good in the completed kit. Maybe better to mix your own match to the color. I also found the forming of the pedal PE straps to be a little stressful.

Next up is the Engine exhaust and afterburner. The fit was great but there is some flash on part D84 that needs careful cleaning up.

Now the mid wheel wells are assembled, and this was very smooth and great fit.

The interior of the fuselage is now done and there is choices here now to match your selected version with the same decal or PE section. The PE is awesome and really makes the interior stand out. You do need to be careful when installing the side instrument panels into the fuselage to line it up correctly.

Now the fuselage, cockpit, and engine can are all assembled. Along with the main bulkheads and nose cone. Please remember that nose weight must be added before closing it up. I added 15g to make the aircraft sit correctly, mounted in and behind the nose cone. Once the fuselage is joined there is some minor filling and sanding required,

The spine and vertical tail are added next and fit beautifully.

Lower wing details are added next and you now can select to have the air brakes open or closed. I went with the closed version as I like the smooth finish. You should now drill out the indicated holes for the mounting of the stores. The lower wing and main land gear bay is now added to the fuselage and when installed in line is a great fit.

The upper wings and flaps are installed next. You can also select PE wing fences or plastic.

The landing gear is built next and this is very complex. You must pay attention to the assembly and also the angle of the gear doors when installed. The nose gear design is in two parts and if you do not assemble as defined it can end up being week and could fail.

Time now to build up the ejection seat. This was very straightforward and looked great with the PE all attached. The canopy fits perfectly. There are two versions so ensure you use the one for the marks you selected to do.

All the additional parts were added, like drop tank and the pylons. You can then select the load out you want for drop tanks and missiles.

I painted the aircraft as I built it to save issues later with masking. I also installed the main markings to the tail and wings during the wing and fuselage build.

The rest of the decals take a long time as there are so many to add.

This was a fantastic kit and really fun to build. I have now built three of the Eduard Mig 21’s and they are awesome.

Thanks go to Eduard for providing this kit to review and to IPMS USA for allowing me to review it for them.