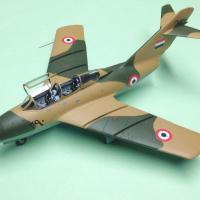 The MiG-15 UTI is the two seat trainer version of the MiG-15 fighter. Originally developed to provide conversion training for the transition from propeller aircraft to jet aircraft, it served as the primary jet trainer for the USSR and much of the Warsaw Pact air forces into the 1970’s.

As with Eduard’s MiG-15 and MiG-15bis, this is a new mold, very different from the old KP MiG-15UTI that some of us still have in our stashes. While the kit is clearly based on Eduard’s current MiG-15/MiG-15bis kits, there is only one common sprue, the one for the wings, as the others are all tailored for the two-seater. As these are overtrees, not a kit, they do not come with instructions or decals, however, since Eduard posts its instruction sheets on its website, all you need to do is go online and download the instruction sheet for the regular kit and you are ready to go!

After the cockpit is done, the next step is to assemble the fuselage, trapping the cockpit and the exhaust inside. With the exception of my error in front of the windscreen, the fit was excellent and very little filler was needed on the main fuselage. I deviated from the instructions at this point and added the nose ring as I have found sanding circular object to be much easier without the wings attached. The fit of the nose ring was very good with only a little filling needed, again I think because I had spread the fuselage a little with weight.

Next is the assembly and installation of the wings. Eduard’s MiG-15 kits include two options for the lower left wing. As best I can tell the difference is that one molding includes a wing mounted landing light and the other does not. The UTI instructions tell you to use the part with the landing light, but unfortunately I missed this distinction until I was doing final assembly, so I now have to paint one on. Before you assemble the wings, you will need to decide if you are going to install any drop tanks on your model as you will need to open up the corresponding holes in the lower wing before joining the wing halves. The kit includes three different styles of tanks and Eduard also offers set of resin tanks that could be used. Otherwise the wings fit together nicely and only required a little clean-up along the leading edge. The fit to the fuselage was very good and I only need a little Mr. Surfacer to smooth out the joint.

As the overtrees do not come with any decals, you will either need to have a decal stash or obtain an aftermarket decal sheet for the MiG-15UTI. As the aircraft was flown by a large number of air forces, with a little research you will probably have a hard time narrowing down which one to do. I found photographs of a Syrian aircraft and after raiding a couple of old decal sheets, I had the markings I was looking for.

This is a very nice little kit and for those of us who don’t always use the kit decals, the overtree system is nice inexpensive way to add a cool kit to our display case. The downside is that the overtrees are not always available and this kit is currently listed as discontinued at Eduard’s website. I hope they change their mind as I have found several other UTI’s that I would like to build without resorting to the kit decals.

Thank you to Eduard for the review sample of a neat kit and to IPMS-USA for letting me review it.