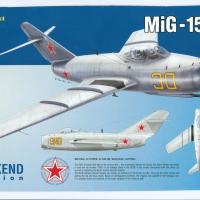 The MiG-15 was one of the early Soviet fighters which, using German technology and originally a British engine, achieved equality in the Cold War race for a modern jet fighter. Most modelers and historians are familiar with the history of the type, so I’ll spare the specifics and keep the historical section short. The prototype was powered by a Rolls Royce Nene engine, and early production models were powered by imported British engines. Competing with the similar Lavochkin 174 prototype, the MiG-15 won out, and entered production in 1948. Numerous variants were produced between 1948 and the mid-fifties, when the type was replaced by the similar MiG-17. The MiG-15 was produced in numerous variants, including fighter, fighter-bomber, two seat all weather interceptor, reconnaissance, target tug, and dual control trainer. Nearly 18,000 are believed to have been built in the USSR, China, Poland, and Czechoslovakia. NATO code names for the type were Fagot and Midget.

The type was exported to many countries in Asia and Africa, and many served until rather recently. A few have been sold to private owners in the US and other countries, where they continue to fly as warbirds.

The type’s combat career began during the Korean War, where they faced off against US forces using the North American F-86 “Sabre” jet fighter. Although both types were comparable in performance, The MiGs flown by North Korean and Chinese pilots didn’t do as well as the F-86’s flown by WWII veterans from the USAF. Some MiGs were flown by Russians, but this wasn’t revealed until much later.

The Eduard kit has been around for a while, and this version is a simplified product, marketed as a “Weekend Edition”. This implies that some of the details have been left out, but looking at the kit, a total of 76 light grey and clear plastic parts, some of which are duplicates, it certainly doesn’t lack detail. The molds are first class, with virtually no flash and most parts easily removed from the sprue with a knife or wire cutters. Panel lines are petite and finely recessed, and join lines are minimal. The cockpit detail includes sidewalls, a seat, floors, control stick, instrument panel, and gunsight. A long tube represents the engine, and wheel well detail is excellent. There is some very good design work in this kit, with landing gear attaching to the wings and fuselage very securely. Some of the instructions are not too clear in such things as instrument panel location, but the eight-page instruction sheet has a sprue diagram, a color 4-view drawing, and many exploded assembly drawings that are very clear and useful. There is a lot of reference material available on the MiG-15, and the Squadron MiG-15 in action (No. 116) has a lot of developmental history but little of the type’s combat career.

Assembly is pretty straightforward if you follow the steps listed in the instructions. The cockpit interior goes together first, including the sidewalls and nose intake, and the engine should then be glued together and installed. The landing gear is especially well done, with wheels and hubs that snap into place on both sides, eliminating the necessity of hand painting the tires with a brush. The wheels then attach to the gear struts, and after the gear covers are in place the whole unit can be easily slid into place on the wing sections. I did this after the wings were attached to the fuselage. Things pretty well snap into place, and not much putty or filler is needed to smooth out the join lines. I would advise, however, adding some weight to the nose. The instructions say to put some weight just ahead of the instrument panel, but I thought this was not enough weight, so I added some weight alongside the side panels. I used lead shot scraped out of shotgun shells, and with the additional weight, the plane balances perfectly. The wings and horizontals fit into place and almost automatically line up properly, with little filler needed. The instructions are confusing on the issue of wing tanks, as the 4-view shows none, but two types of tank are provided. Holes need to be drilled into the lower wing sections if tanks are to be installed, so make this decision before you start. One problem I encountered here is that the instructions are a little vague on which set of tanks to use, and I found that one tank didn’t line up the way I thought it should. Be careful here, and follow the directions as closely as you can. Or maybe just don’t install the tanks, and you’ll solve a lot of problems. Lots of photos don’t show tanks or racks, so you’ll be safe without tanks. The canopy and clear parts are very detailed, and very small, so be careful not to lose any.

Most variants of this aircraft were silver overall, so painting is not a problem. The kit provides decals for one airplane, a MiG-15bis, c/n1315376, Yellow 30, formerly of the 64th IAK, in the Soviet Union in the middle fifties. Apparently, this aircraft was originally exported to North Korea, where it served with the 64th IAK (whatever that was), and then was returned to the Soviet Union, where it was operated at ”Yellow 30”. The Korean number was “Red 1976” and according to the instructions, you are to paint the airplane silver overall, and apply the NKAF markings and code numbers. Then you are to spray a light coat of aluminum over the codes and stars, and apply the Russian stars and codes as shown on the drawings. Never one to obey instructions, and since I already had a Soviet MiG-15 in my cabinet, I decided to stick with the North Korean markings, just omitting the Russian ones. Now I’ve got a North Korean MiG, and some spare Russian markings for another model. The decals are of excellent quality, and don’t need trimming or decal solutions. A very small decal sheet is provided for seat belts, but they are not mentioned in the instructions, and I suspect that they were included as an afterthought. They are nicely done, but I didn’t even notice them in the box until I had the canopy in place, although I think I can install them through the small opening in the top. A quick coating of glosscote finished the job, with a few dabs of paint for the navigation lights, and the plane was ready. I left the canopy open, as there is sufficient cockpit detail to make this worthwhile, and added a wire LF antenna. Now the kit is finished, although you’d be hard pressed to finish this one in a weekend unless you worked all day Saturday and Sunday. But, who cares? It was fun, and now I’ve got another jet on the shelf.

I’d highly recommend this kit, and since it can be done in many different national markings, it will probably become one of the standard MiG-15 kits for years to come. Get several of them if you can.

Thanks to Eduard for the review sample.