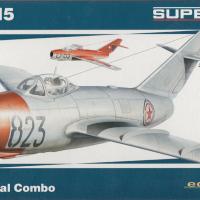 This is Eduard’s third release of their 1/144 MiG-15. The first was the Czechoslovak MiGs, the second was the MiG-15 bis, which used a different engine, but is generally the same.

The MiG-15 has been used by 44 different countries, including the US Air Force (!) and such world powers as Albania, Burkina Faso, Mali, Sri Lanka, and Yemen.

The aircraft on the decal sheet this time are from North Korea, China, USSR, Poland, and two Czechs.

I decided to do the Soviet MiG after checking out the histories of the aircraft. The pilot of this aircraft was Major Alexi Mikoyan. His uncle was Anastas Mikoyan, who was Khrushchev’s number 2 man for many years. His father was Artem Mikoyan, one of the founders of Mikoyan-Gurevich (MiG) design bureau. I think the pilot was pretty well connected.

You get two of everything in this kit. There are two aircraft and two canopy/wheel masks. The decal sheet has complete markings for six different aircraft.

The basic aircraft comes on two gray sprues and one clear sprue with the canopy. The mask sheet covers two canopies and two sets of main wheels on a single sheet.

Construction begins with the interior, which is basic. There’s a cockpit and the intake splitter. Put some weight in the top of the splitter assembly to insure the nose wheel stays on the ground. It doesn’t take much weight, which is good, because there’s not much room in there. I put in some bird shot, and it was plenty. The bottom of the splitter is the nose wheel well.

The cockpit should be painted gray, and the seat painted green. There’s a decal for the instruments on the panel. The splitter is painted silver.

The fuselage is split top and bottom, with the wings already attached to the top. I was very pleasantly surprised at the quality of the fit with the fuselage sections and the interior parts. I had to scrape a tiny bit on the top of the splitter to get a good fuselage fit, otherwise everything was lovely. No putty needed, only a little scraping where the seam overlapped a bit.

Next I put on the vertical and horizontal stabilizers. I had to scrape the bottom of the vertical stab just a bit to get a good fit, but otherwise everything just fell into place.

I also installed the wing tank pylons, with no problems with fit.

And I was ready for painting prep.

I put the mask on the canopy and got out the airbrush.

The other wonderful thing about this MiG, besides the pilot’s back story was that it was overall natural metal. No masking required, other than the supplied canopy mask. I used Testors Aluminum Metalizer on the whole model, followed by a coat of Future, because the Aluminum tends to rub off easily unless coated. I also painted the landing gear, gear doors, canopy, wheels, underwing tanks, and the guns. All aluminum.

I used a small piece of make-up sponge in the cockpit opening to prevent overspray into the interior.

After the Future had set up, I put the masks on the main wheels and painted them flat black. I also did some detail work, such as painting the gun sight black, the nose wheel tire flat black, the area surrounding the cockpit opening interior gray, the nose cannon muzzles gun metal, and the exhaust area with Testors Metalizer Burnt Metal.

The decals were probably the most troublesome part of the whole project. The red stars came off the backing sheet perfectly, went where I wanted them to, with only a little nudging with a brush, and stayed put. The numbers for the nose behaved like I wanted them to. The only problem I had was the wing walks. One of them folded, and I didn’t see it until too late. I fixed this with a bit of black paint and a fine brush. These decals are by Eduard, but they rival Cartograf in quality.

I put a coat of Future over the decals to protect them from handling and blend them into the finished surface.

All that was left was to put the guns on the nose, install the exhaust section, install the nose and main landing gear and doors, and put on the canopy. There were a couple of moments where I had some trouble getting one of the nose gear doors to fit well with the gun next to it, but it did come out as I wanted. The main gear legs and doors were almost trouble free. The canopy fit beautifully, and I used Micro Scale’s Krystal Kleer to attach it.

At the National Convention in Columbus, I asked one of the Eduard guys how they managed to make such a super fitting little kit as the MiGs in this series. He told me they simply shrank their quarter inch MiG-15. This worked. This worked very well.

My evaluation is that I highly recommend this kit. I used no putty in the entire assembly process. The decals worked as nicely as any I have used anywhere. There were no “gotcha”s in the assembly, and I came out with a nicely done, robust model.

Many thanks to Eduard for the review kit, and to IPMS USA for letting me build it for this review.