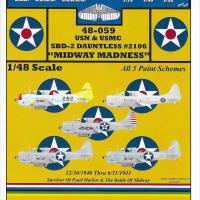 This is the first Yellow-Wings product I have had the pleasure of reviewing, and my initial reactions were very positive.

The focus of this company is on USN, USMC and USAAC subjects from the 1930-42 era, and this one falls right in line. This particular set provides markings for one specific aircraft, SBD-2 Dauntless #2106, during 5 phases of its lifetime. The standard ziplock bag contents consist of a stiff cardboard, full-color “title board”, 5 double-sided instruction pages (printed in black & white and color), and 2 full pages of decal sheets printed by Microscale. This is the 1/48th scale set, and there is also one available in 1/32.

The five different schemes for Dauntless #2106 provided are:

The first two pages of the accompanying instructions provide a detailed history of the aircraft and its various crews. This Dauntless was present at Pearl Harbor during the Japanese attack (was at NAS Ford Island for engine repairs). Subsequently it was aboard the Lexington during early action in the Pacific, participating in raids around New Guinea. In April 1942, #2106 was again in Pearl Harbor awaiting reassignment when USS Lexington sailed for the South Pacific. Lexington was lost at the Battle of Coral Sea while this Dauntless remained at Pearl Harbor. Shortly after, it was transported to Midway Island to join the Marine Corps’ Scout Bombing Squadron based there. It participated in the historic battle for the Island in June of 1942. During an attack on the Japanese aircraft carrier Hiryu, the Marine Squadron lost half of their Dauntlesses, and this aircraft returned with approximately 250 holes from bullets and shrapnel. Pilot Daniel Iverson Jt and gunner Wallace Reid were awarded the Navy Cross and Distinguished Flying Cross respectively for their heroism on the mission.

Following Midway, #2106 was completely overhauled and sent to the Carrier Qualification Training Unit at NAS Glenview, Illinois. On June 11, 1943, the aircraft stalled during a routing carrier landing and crashed into Lake Michigan. The airframe was recovered from the bottom of the Lake in January 1994 for the National Museum of Naval Aviation.

This aircraft remains one of only four still in existence that were present during the Pearl Harbor attack, and the only surviving naval aircraft to have participated in the Battle of Midway. Definitely a worthy candidate for its own decal sheet!

Following the two pages of very detailed aircraft history, Yellow-Wings provides two pages covering generic instructions for painting (including a great table of official USN/USMC colors and corresponding model paints), as well as generic decal instructions. This is followed by a page of side profiles for each of the schemes rendered in full color. Next up are three pages of top and side views of each of the schemes. Here the airframes are drawn in black and white (resembling a tech drawing), and only the markings are in full color. There is also a full-page reproduction of the actual Painting and Markings Blueprint for the SBD-2 airplane from Douglas Aircraft, listing the pre-war colors that were to be applied for each aircraft from VB-2.

The decals themselves are printed by Microscale, so you can be assured of their quality in both printing and application. One sheet covers all the specific markings for each aircraft, and the second sheet covers all the various-sized National Insignia. Each specific size of insignia (50”, 72”, etc) is very clearly labeled on the decal sheet. There are five full sets of National Insignia, so the modeler has virtually every marking needed should he or she with do build all five of the schemes.

What else is there to say – a great package that is clearly a subject near and dear to the manufacturer’s heart! Interesting and in-depth research, clear and extremely concise markings schematics, and high-quality decals make this a must-buy for those interested in the subject. I am looking forward to seeing more from this company!

Thanks to Yellow-Wings Decals for providing the sample, and to IPMS/USA for allowing me to review it!