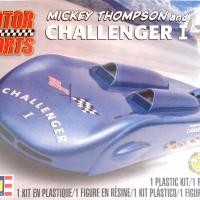 Back in 1960, I remember a guy named Mickey Thompson setting the land speed record of 406.6 mph at Bonneville Salt Flats. He did this feat with one of the most original cars ever seen. This was the Challenger 1. It was powered by four supercharged Pontiac engines, each powering a separate wheel. I remember at the time hoping that someone would make a model kit of this car. Well, Revell did back in 1962. They produced the kit from 1962 until 1966. I was busy with getting on with my life at that time, so I forgot about Challenger 1. Last year at the IPMS Nationals in Orlando, I saw that Revell was going to re-issue the kit. I couldn’t wait for it to come out and when it came up for grabs by the Reviewers corps, I jumped at the chance to build it.

Upon opening the box, I was greeted with several sprues of brittle white plastic. The parts looked very good, considering the age of the molds. The instructions were in book form, with everything in blowup format and all the parts numbered. Some of the placing of the parts was a little fuzzy. Test fitting was required on some parts.

As I stated, this car had four engines and each engine had 28 parts. When they were finished, they were a gem to behold. Painting instructions were clearly pointed out, so no guesswork was needed. The fit of the parts needed a little fiddling to get to look right, but the end result was worth it.

The tube frame of the car really looks fragile, but it’s not. Care must be taken putting the engines and trannies in the frame to avoid snapping it. When in place it all looks great.

The body of the car is in 7 parts and engineered so that the front, hood, and rear may be removed to show the wonderful interior. I was a little disappointed that so many of the parts were chromed. I primed them and sprayed aluminum for a more realistic finish. One other disappointment was that there as no clear part for the windows. Back in the early ‘60s. Revell produced a series of cars without windows, so I guess that technology had not been perfected at the time.

I primed all the parts with my usual light grey Duplicolor Primer. I used spray paints for all parts except for the car body, for which I used Duplicolor Metallic Ultramarine Blue.

Overall, I am very pleased with the result of my build. I decided to leave the body of the car off to display the beautiful interior. I would highly recommend this kit to a builder with a few kits under his belt. For it being an old kit. I was very impressed.

On another note – this kit included a painted figure of Mickey Thompson and it looks just like him.

I wish to thank Revell/USA and Steve Collins of the IPMS/USA Review Corps for giving me this kit to review.