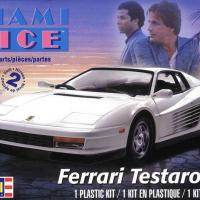 Sonny Crockett, Rico Tubbs and Elvis (not the Legendary Singer) were all familiar names for anyone growing up in 1982. Fast Cars, Fast and sexy women, drugs, guns and fast boats! What was not to want or like? Even the Music rocked! OK…maybe not rocked but definitely top 10 hits. If none of this is ringing bells, you definitely missed out on MIAMI VICE. This was one of NBC’s crown jewels in the hit series. Men’s fashion, pop song stars, and the automotive industry were all influenced by this five year series. The theme song alone garnered two Grammy awards. People Magazine stated that Miami Vice “was the first show to look really new and different since the color TV was invented”. Now that is a pretty bold statement. Two distinct, expensive and beautiful cars were also featured in the series. There was a black 1972 Ferrari Daytona Spyder 365 GTS/4 and a white 1986 Ferrari Testarossa! The Sypder was actually a kit car based on a 1980 Corvette chassis. Ferrari got involved with Lawyers (now there is a SHOCK) and two episodes into season three it was blown to bits. Ferrari donated two brand new Testarossas as replacements.

This is a ex-Monogram re-release. Monogram has released it several times. Monogram released it once as the Miami Vice car, then as a yellow version and finally as their Exotic Car Series in Red. This latest incarnation has Revell returning it to it’s white sprue roots. I assume (I could be wrong) that Monogram released colored sprues to make it easier to finish. You get a body (inside a plastic bag), three other white sprues, a clear sprue (containing windows and lights), a chrome sprue, tires, another 12 page pamphlet style assembly guide, and a small decal sheet. All this adds up to a 96 piece kit.

I am quite impressed with this one! All the parts look nice in this one. The chrome on the other car kits I have been reviewing of late all seem to suffer from something. Most of it has been excessive flash along the joining lines. Not in this case. The parts are nicely done with the only issues are that Revell chromed the inside wheels. Now, I have never seem a Ferrari Testarossa so maybe they do but something tells me no. The kit has a nicely detailed engine to boot. Another drawback is that there is a Universal Studios sticker attached to the floor pan. The one I removed from their Glitter Bug took almost 15 minutes to get the adhesive off the plastic after I removed it.

I would like to thank Revell for releasing and providing this kit for review. Looking over this kit brought back lots of memories of the show. Thanks to IPMS/USA for allowing us to have a place to show of these great kits to other model builders. Go out there and pick up one or two of these masterpieces of automotive engineering.