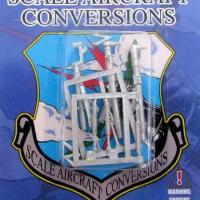 IPMS/USA thanks Ross and his Team at SAC for supporting the IPMS USA reviewer corps with one more of many monthly releases, with extremely useful and well-thought out landing gear additions for the modeling crowd out here in the modeling world.

This review is for the SAC landing gear released for the relatively new 1/48 MENG F-35A. (If they do an F-35B and C, we are truly going to be blessed, Meng’s new kit has great details, fit, and has a host of appropriate ordinance with proper dimensions and appearance…).

ANYWAY, with this SAC set you are lucky, because you can actually install the gear after the model is assembled. Comprised of 11 parts, you get single-item main gear struts, retraction jacks, drag links, and three torque links already assembled. They are just as detailed as the plastic items, with no flash. I appreciate the drag links in particular, because the microscopic kit items, while being to scale, are really difficult for me to handle and install. The metal versions just superglue into place, without the fuss… easy!

A note on MENG plastic: I find the plastic hard and durable, with just enough solvent response to liquid cement to properly assemble the precision kit parts. The kit gear is probably ok as is, BUT, (and this is my personal observation), I learned the hard way that the harder plastic snaps off if you load it. (no bending). This occurred on my almost-complete P-51D, where I had a magazine land on the model while it was sitting on the mains without the tires, and the gear snapped at the top of the wheel offset forks. It will never be the same, and I had not even put the decals on! As stated in a recent build review, the SAC gear will bend and not snap off, which makes it easy to straighten out. Of course, three or more occurrences will result in work hardening the metal and possibly snapping THEM, but that may be a hint to stop dropping the model. (!)

I began with the nose gear, which provides a strong, single-piece nose gear with an offset wheel mount capable of handling the weight of resin upgrades (Ejection seat in this case)… SAC’s gear copies the kit parts in white cast metal; as usual the shiny surface is ready for primer without additional work; my sample had no seam to scrape off, and the molding was flawless.

The kit-supplied main gear fit into the kit well sockets, to which you then add the drag link and retraction rams with a touch of superglue.

This build is not complete as I am planning on reviewing personal additions such as the very well done KASL ejection seat, the Galaxy masks for the RAM, IsraCal decals for the IAF’s newest Addition to their fleet, and the use of MRP HAVE GLASS overcoat. (yes, I acquired some… ).

The nose gear leg drops into the existing mounting hole, which makes for a strong and durable assembly. The drag link is attached to the forward housing and the gear and this section is then complete.

s usual the strength of the gear makes their acquisition worth the extra cost for kit longevity; the metal takes the place of the kit plastic gear with ease, and it holds up the model without complaint. A full “10” Score set… thanks again to Ross and his crew for working with us at IPMS USA