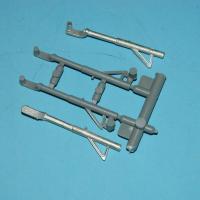 IPMS/USA again thanks Ross and his Team at SAC for supporting the IPMS USA reviewer corps with one more of many timely releases, with extremely useful and well-thought out landing gear additions for the modeling crowd out here in the modeling world. And thanks to John and Phil for sending it to me to be reviewed.

This is one of SAC’s more complex gear… That should be expected, because the B-52 gear is appropriately labeled in the “Steampunkt” realm. Working in the wheel well reminds one of movies on the Thames River in the UK where closeup of bridges and other ironwork would be right at home in the B-52 caves.

Consisting of 30 well-cast white metal bits, a careful application of gel superglue and care in assembly can result in almost perfect seams and alignment. The actual aircraft has a bunch of cables and the like, so the majority of the kit items takes up this upper section to a new height of modeling frenzy. Just replace the kit gear parts with the SAC parts, use glue sparingly, and you will be rewarded with four separate landing gear, strut supports, trunnions, etc.

The pix tell the best story as usual. I painted after assembly, with a dark Gray (Neutral, “Boeing gray”, or Tamiya spray primer are all acceptable gear well and bomb bay colors on current H-models. It’s a gloss gray, by the way, because this area gets absolutely filthy over a couple of years, EVEN with a wash or two thrown in there.

The gear legs are gloss white, are the gear trunnions. Old D-models (and E were all silver aluminum painted), with Yellow zinc chromate inner gear and bomb door and well colors. And some parts were Interior Green. You modelers get to figure it out for it then, but the T.O now calls for tray main wells, bomb bay, and door interior, and White Struts. Including the tip protection gear. HOWEVER, most of our BUFF’s have the wells out there painted zinc chromate yellow/green. DACO’s book, “Uncovering the Boeing B-52H Stratofortress (No. 23) by Danny Coremans” is mandatory reference material. I have been using it at work and home as well…

In using separate well-cast white metal parts, this gear is the usual replacement for the kit gear.

This SAC set adds the usual structural strength to the weakest part of most models: The landing gear. Cast tough yet malleable white metal, it addresses any concern for major damage while moving bombers around.

In my continuing opinion, I recommend fellow IPMS members buy and use this gear without concern, as it does work.