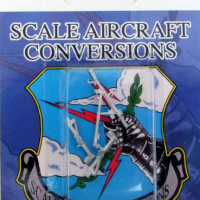 We at IPMS continue to thank Ross and his Team at SAC for supporting the IPMS USA reviewer corps with what has turned into a monthly release schedule with extremely useful and well-thought out landing gear additions for the modeling crowd out here in the modeling world. What started out as an “I don’t know if they will sell” idea a few years ago has flourished into a busy worldwide trade for modelers seeking just a bit more out of their model accessories…

This review is for the SAC landing gear released for the relatively new 1/72 F-15E from Academy. This kit is a jewel; there are two areas needing true replacements for a contest level model, that being the “featherless” open afterburner nozzles, which are supplied simplified, and the rather thick one-piece canopy over the extremely well-detailed cockpit. Those issues are for others to address… SAC provided us three metal parts to replace the kit-supplied plastic gear.

Out of the package, SAC once again provides a direct replacement for the kit landing gear. On examination, the kit gear is simplified with solid torque links, and many details not included. In this scale, I find this acceptable. SAC’s gear copies this in their trademark white cast metal; The shiny surface is ready for primer without additional work; my sample had no seam to scrape off, and the molding was flawless. Well beyond my capabilities, and I would venture far beyond the capabilities of most including the usual naysayer “It’s not perfect” crowd who I tend to observe would complain if you gave them a new car for free because the color didn’t meet some FS number….: )

As usual, the offset nose gear strut is almost a given as far as requiring replacement with metal. In fact, the kit gear is installed during assembly and there’s really no way around it. If you are unaware, this kit is mostly snap-together in design, and despite this feature is a really nice build. It took time to clean up the parts, and I glued everything in place. Fit is almost perfect! I had one area which fought me, and that was the forward fuselage assembly mating to the aft body and wing assembly; this is a common molding feature among Eagles, allowing not only two but single-seat models, as well as preventing an unsightly seam down the side of the model.

The nose gear leg is trapped between the fuselage halves during assembly, and then is offered up to the aft section. Somehow I messed it up… but that’s what putty is for.

The fact the gear legs are metal is where the beauty of the medium comes into play; if it had been plastic, I know I would have snapped it off two or three times. Not so with SAC gear parts; they resisted my efforts to break them off (after installation) on multiple occasions. Same for the main gear; it pushes into place during installation, and the metal resisted till the end of the build and beyond.

Final analysis shows the gear is worthwhile; the metal takes the place of the plastic with ease, and it holds up the model without complaint. A full “10” Score set… thanks again to Ross and his crew for working with us at IPMS USA!