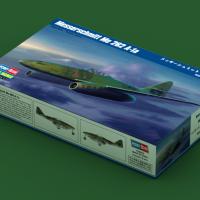 Hobbyboss has released the main production variant of the Me-262: the A-1a version. The kit comes in 13 sprues, a clear sprue for the canopy and a metal nose wheel well to prevent having a ‘tail sitter’. The sprues are cleanly molded, free of flash and with well-defined recessed panel lines.

The model has a full interior, consisting of a nose gun bay, fully detailed cockpit and main landing gear bay plus a nicely detailed back fuselage (with a radio set and a compass set). However the detail in the back fuselage is pretty much impossible to see once the model is finished. There is only one service panel and it is not large enough as to allow viewing all that detail.

I’ve started construction with the cockpit tub and main landing gear well. Spend some time there doing careful painting and detailing and you will have a nice looking cockpit. The instrument panel comes as a decal, but the rest of the detail and side consoles have raised detail for dry brushing. The seat lacks of seatbelts and they are not provided as a decal either. I choose to add seatbelts from a generic “Luftwaffe seatbelts” decal sheet I had at hand.

After closing the fuselage sides, I realized the tolerances are very tight. While doing dry fitting of the parts, I could almost hear the parts “snapping” into place. With a coat of RLM 02, I actually had to sand back to the bare plastic in some areas, as to recover the nice fit I had before. That is how tight the tolerances are.

I’ve always liked the lines of the Me-262, so I wanted to display my model with all the access panels and canopy closed. Besides, that means I have now some nicely detailed cannon parts that can go to the spares box!

Due to my decision of modifying the nose panels to be in the closed position, I needed to use some putty. So don’t judge the model by the white filler you see in the forward fuselage. The wings are a straightforward affair. However I did have a very minor gap around where the engine nacelles join to the wing.

I choose the night-fighter version for finishing the model. This particular airplane was not fitted with radar and the pilot got several kills being vectored into position by ground controllers. The color instructions call for RLM 78 (light blue) undersurfaces, but the cover art shows it on a black undersurface. A bit of online research show aftermarket decal sheet with the undersurfaces in black. After further online search, I’ve read there are not known photos of this particular airplane and the profiles have been based on the pilot recollection after the war.

Like in other Hobby Boss releases, the decals behaved quite well. They are thin and opaque, yet they can be handled a few times if needed, in order to position them. Note that the swastikas are provided as two half-markings that you have to compose together. You are provided with a full stencil set.

The landing gear went together easily, although mounting it was a bit of a challenge given the proximity of them to the engine nacelles. At the same time, the nose landing gear requires minor modification (shave off a few locating pings) to be installed after the model is assembled. You can still superglue it in place and it has a very positive fit.

Perhaps the only word of caution will be to consider adding a bit more of extra weight to the nose. The provided weight is enough to prevent having a tail sitter; however it is easy to tip it back on its tail.

The overall fit of the model is excellent. The surface detail is very good too. The decals behaved flawlessly. It is a great kit, with a price tag that provides great value for all the plastic and detail you get. Considering the number of parts (over 200) I would recommend this kit for any modeler, except a beginner.

I would like to thank MMD Squadron, Hobbyboss and IPMS/USA for the review sample.