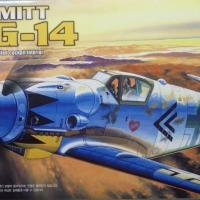 What can be said about the Messerschmitt Bf109 that hasn’t been said before? Actually, as it turns out, not very much. I will say that the Bf-109G-14 was Germany’s attempt to standardize production of the 109, incorporating the variety of changes made to the Bf 109G-6. On paper, this seems to make sense, however, in practice, the G-14 series were added and built in the same production lines as the G-6, so in the end, it becomes very difficult to tell a G-6 from a G-14.

This is Academy’s latest version of the Bf-109. This is an updated version of their 2001 release, so there aren’t too many surprises with the new release. Academy continues to mold a separate tail section from the fuselage, and provides two different cowling covers, which makes it much easier for them to use similar molds to produce Emil’s, along with their Gustav lines of kits. The molds are crisp, relatively flash free, and have some very fine panel line and rivet details. The kit provides an adequately detailed cockpit, but no gunsights or seat belts, and the canopy is provided in 3 clear parts for the front armored windscreen, and the head armor and Erla Haube-style canopy.

Construction is relatively stress-free with a good fit for most of the kit. The upper wing to fuselage attachment is tight and needed very little clean up. The landing gear is a bit tricky to get into the correct position and there is no detail inside the wheel wells, but with a little patience you can get the proper stance without much effort.

The kit includes the aileron balances, two choices of antennae, and two choices of drop tanks. The decals provide marking and stencils for two planes: Erich Hartmann’s famous winter camouflage from 1945, and a plane flying for JG11 in 1945. I choose to go with the plane featured on the box art, which is Hauptmann Hartmann’s plane.

My only issue with the kit was the decals. I have never had much luck working with Academy’s decals, and this kit was no exception. They’re too thick, and don’t react well to any of the usual methods of attaching them to the plane. Fortunately, the scheme I choose didn’t have a lot of decals to work with, but the ones it did need, were a struggle. Academy does not include any Swastikas with their decals, so the modeler will need to add some aftermarket, or do like I did, and just leave them off.

Overall, I recommend this kit. For a good price the modeler gets a nicely-detailed kit that goes together relatively easily. Personally, I would use aftermarket decals, but others may have better luck than I did.

Thanks to Academy, Model Rectifier, and IPMS USA for providing the review kit.

Underbelly of aircraft
Previous Next