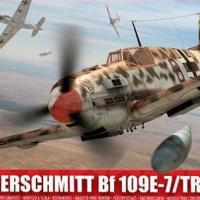 Being that there is so much out there on the Bf-109, I will not take up any time with the history. The E variant was the first major upgrade of this airframe and was the main variant from the beginning of the war until mid-1941.

This kit is made up of 3 sprues of grey injected plastic and 1 clear sprue. The parts are flash-free and have very fine detail. The only problem I had was the small parts (pitot tube, antenna mast, gun barrels, and counterweights) that have two attachment points on the sprue. It made it very difficult to remove these, and in the case of the mast...I broke it. That being said, I have to hand it to Airfix as their new tooled kits are fantastic. The decal sheet gives you markings for two aircraft – one Luftwaffe In desert cammo (black 8) from 1941 and one Royal Bulgarian aircraft from 1942. Since no swastika is provided and I had no spares, my choice was simple.

The 7-page instruction book shows 16 steps + decaling (pages 5 & 6 are the color pages showing camouflage and markings) for the assembly of this kit, starting with the propeller and cockpit. The cockpit has a little detail on the right side and none on the left, along with rudder pedals and a control stick, which is too bad because you have the option of leaving the canopy open. A decal is provided for the instrument panel and looks rather nice. If you wish to leave the pilot figure out, the seat has belts molded in (thank you Airfix!). Steps 3 & 4 deal with putting the fuselage and cowling together. This is a little tricky but not bad. There is a molded-in engine and the prop must go on at this time, so care must be taken so as not to glue the prop (if you want it to turn, that is). About that engine – there is not a whole lot of detail, but it does not look that bad (I know, no mg’s) and I decided to paint it and leave the cowl loose just to let you all see it. Steps 5-10 deal with the wings, rudder, and horizontal stabilizers, assembly of landing gear and small parts for the wings (pitot tube, counterweights, and guns). Nothing tricky or hard here, actually pretty easy! I chose not to put the small pieces on until the end of the build due to their fragility. Step 11 is when you get to put the flaps on and are given the option of posing them up or down. Next up is the landing gear, and you are also given an option here. You can build the gear and pose them extended, or use the optional parts and have them retracted. Steps 13-16 are for the canopy and external stores. The canopy is composed of three pieces and is made to be posed open with small tabs that fit into the fuselage. If you want it closed, just carefully cut the tabs off. You have an option of fuel tank or bomb for the external store. As I wrote earlier, I had decided to install the wing guns, pitot tube, antenna mast, and counterweights last as they were very small and I did not want to break them. Well, I broke the mast and lost one of the weights. Due to their size, it’s not so noticeable on a 72nd kit.

I used Model Master acrylics (RLM 71, 02, & 65) for the paint scheme, as that was what the instructions indicated. RLM 70 was used for the prop and spinner and 02 for the cockpit & wheel bays. The decals went on without a hitch...almost. Of the over 40 stencils to put on, I passed on using the ones on the antenna and the numbers on the lower port side fuselage as they gave me a bit of a problem due to their size, sorry. A small amount of Solvaset made them settle down very nice.

Another well-done to Airfix. I recommend this kit to anyone who wants to do an inexpensive 1/72 109.

I would like to thank Hornby-America for providing this kit and IPMS/USA for letting me review it.

Under the cowl
Previous Next