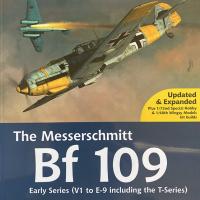 Valiant Wings Publishing's next title in the ever-popular Airframe & Miniature series is an updated, revised and expanded second edition of  The Messerschmitt Bf 109 (Early versions V1 to E-9 including T-series) – A Complete Guide to The Luftwaffe's Famous Fighter by Richard A. Franks.

From the Publisher: This fifth book in our much-acclaimed series has been out of print for a while now. With new early Bf 109 kits now available in all scales, plus a mass of associated accessories and decals, it seemed right to make this book available once again.

Initially published in 2013, this book was widely regarded as the only book one needed regarding the infamous Bf-109s’ early variants. I would strongly argue that still holds true, today. This book, in its’ 2nd Edition, is an absolute treasure chest of reference information.

The first section of the book covers the evolution of the Bf-109 in all its’ variants, with photos, drawings, and bulleted lists of details. Camouflage and markings are written about extensively, and using a multitude of period photos, color profiles, and even a line drawing that shows where all the stenciling should be.

The second section covers the Bf-109 in scale modeling form. Taking a selection of the most modern and “accurate” kits on the market, arranged by scale and manufacturer, the author takes you through the positives and shortcomings of Every. Single. Kit.  I counted 66 kits examined, and the descriptions of each are “Rivet Counting” to the extreme. Read this section, and you’ll learn exactly which kits are the best bang for your bucks. There are also numerous builds of some of these kits, crafted by Steve Evans and Libor Jekl.

The third section focuses on the details, and starts with an illustrated history of what differences there are between all of the early series airframes. Couple that with Messerschmitt factory drawings and photos, walk-around photos, and diagrams, and you literally have everything you need to accurize your model.

The appendices include a ridiculously exhaustive list of aftermarket scale modeling kits and products to dress up your latest project, and 2 eight-page line drawing foldouts in 1/48 scale. Really, very spectacular.

My initial impressions of this book when I first received it were so strong, I ordered Part 2 (Late Series) from Amazon the same day. If you have any interest in Willy Messerschmitt’s greatest achievement, this book belongs in your library. I can’t recommend it highly enough. My thanks and gratitude to Valiant Wings Publishing, and IPMS/USA for the review sample.