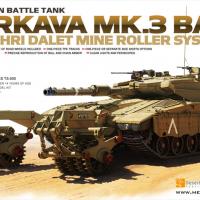 The Merkava Mark III was originally introduced into the IDF in December, 1989. Sporting upgrades to all major systems, the Merkava was the most modern main battle tank in the world for its time. The Mark III was given a 1,200 horsepower engine, a 120mm Israeli-designed main gun, and new laser designation and fire control systems. The development of the BAZ system in 1995 further increased this vehicle’s survivability and lethality. Some features of the BAZ system are air conditioning, NBC systems, and removable modular armor on the chassis and turret.

When you first open the box, the sight of the upcoming challenge hits you. It is a very packed box. Approximately 20 sprues of tan plastic fit tightly inside the large box. There are also clear sprues and rubber tracks. All sprues are molded very cleanly with minimal flashing. Some of the smaller parts do display mold lines, so careful sanding is required. It seems as if several versions and variants could be built from this box. The BAZ armor system is included, but not shown on the box art or in the instructions. The instructions themselves are in a very nice booklet with excellent diagrams. This kit is, by far, the best engineered kit I have worked on in my short span in the hobby. Proportions look correct, based upon everything I have seen. Very small fiddly bits are all throughout the kit, so I would advise a catch-bib or something of that nature when assembling.

The kit does lack the anti-slip surface of the Merkava. Many different methods have been explained on the internet to remedy this shortcoming. My own solution was embossing powder and Future.

I would have to estimate 30-40 hours construction time on the kit. Several issues concerning fit are apparent, but no show-stoppers were encountered. The only difficulty I saw was a slight warp in the forward upper hull. This warp creates considerable problems with installing the engine cover. The solution was to cement and clamp each side of the engine cover one at a time. You can see some of the raised front edge available in some of the early photos. This process took 4 days (one for each side), but yielded quite pleasing results.

I would suggest careful planning due to the high number of options available in regards to stowage baskets, finders, and optics. Plan ahead so that the project is simpler farther down the line. If I were to complain about any portion of the kit, it would be the tracks. Rubber band tracks and I do not get along. Thankfully, the side skirts cover the top side of the running gear. This allows you to cut and affix them to the upper wheels without it being visible.

After finishing the main vehicle, I turned my attention to the mine roller attachment. This was my first time dealing with multi-media (chains and styrene), but I found them a great deal of fun. Everything went together just as it was supposed to. The attachment to the tank itself proved to be a challenge, with very small attachment points. A good amount of CA glue was able to remedy this.

Decals were the real treat of the model. I have always viewed this step with great trepidation. Meng did not disappoint. The decals were clean and lay down perfectly. You can see in some of the photos how well they responded to MicroSol. Perfect.

The instructions were semi-vague in calling out specific colors to paint the finished model, referring to “sail color” and the like, but it was nothing that a few reference images weren’t able to remedy. Aside from this, I found the instructions very clear, well printed, and well presented.

As stated before, this is the best and most complex kit I have worked on in my time in the hobby. Excellently detailed, it will give you hours of enjoyment during the build. No real advanced techniques were used during construction. I would highly recommend this kit to anyone willing to put the time investment down. With this kit, Meng has shown itself to be on the cusp of becoming the next “thing” in our hobby. I hope that they continue to produce kits of this quality for many years.

I would like to express my gratitude to Stevens International and IPMS-USA for the chance to review this wonderful kit.