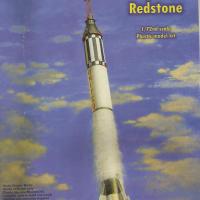 Horizon Models, a company based in Australia has recently released another in a series of U.S. spacecraft, this one being the Mercury Redstone, item # 2004. Horizon has covered the Mercury series well with this new release, along with the earlier releases of the Mercury Capsule and the Mercury Atlas kits. And with this kit, Horizon Models announces that their coverage of the Mercury Program has been completed. Future releases will cover other launch vehicles and other programs.

If you’ve seen the artwork on the box top (one can Google Image the artwork) then you know that it catches the spirit and “feel” of the Mercury Redstone as it begins its journey. Paul Renwick Farley, the artist who illustrated all three of the Mercury kits, did justice to that spirit.On the reverse side of the box are three profile illustrations by Juanita Franzi of Aero Illustrations. These illustrations are an excellent resource for colors and decal placement.

This kit, as was the case with the previous release of the Mercury Capsule and Mercury Atlas, has been produced with other future releases in mind. Horizon reports that there are plans to release the Jupiter-C IRBM and the Sparta/WRESAT versions of the Redstone. In fact, this Redstone kit has some P.E. parts that are not used on this kit but, rather, will be used on the Jupiter-C kit.

In press releases Horizon shares the following information about the Mercury Redstone. That information is as follows:

Note that those previously mentioned illustrations will provide you with references for colors and decal placement. Also, the right-side panel (as one is looking at the box art) lists the paint colors required as well as an image of the finished model. So, let’s take a look inside the box.

There are three sprues, two of which are identical, those being Sprues “R”. The third sprue is labeled as “M”. There are two small packages in which the PE parts can be found and two sheets of decals. A total of 65 parts, both plastic and PE, are within, some of which are duplicates and are not used for the Mercury Redstone.

Molding is sharp and clear with no flash. When parts are removed from the sprue there will be some clean up required. Caution is advised when removing the smaller, fragile parts from the sprue. In fact, I used a UMM saw to remove some of the more delicate parts. Later in this review, your attention will be drawn to some specific parts which require great care. I found only one problem with sink marks on this otherwise beautifully molded kit. Each of the four parts R10, the control surfaces which are attached to the lower, outside edges of the four tail fins each have a small mold-release mark, but only on one side of the control surface. It’s not a problem since the mold-release ridges can be sanded away rapidly with a medium grit piece of sandpaper. Other than those four parts I found no other flaws anywhere on the model.

This kit allows the builder to model one of six Mercury Redstone missions. There are decals and some parts that are specific to each mission and you will find that the kit instructions provide information to help the modeler apply the parts and decals to the Redstone and Mercury Capsule. Those six mission options are:

The decals are printed by MicroScale and are, typical of MicroScale, easy to work with. They are thin enough to adhere easily to the curved surface of the Redstone, and the rippled surface of the capsule. The decals are not transparent so there is no “color leakage” thru the decal. I used room temp distilled water to soak the decals and they were ready to go within 30 seconds. Using Future Floor Wax to prepare the model surface I found the decals very easy to apply. I would like to draw attention to the fact that the upper black and white series of vertical panels and checkerboards is a single decal. Horizon provides and extra row of checkerboard and vertical stripes just in case there is a gap when the decal is applied. I found that the decal wrapped around the Redstone with the “right” and “left” edges of that decal matching up perfectly. I stretched the “decal” stage over two days but actual “gloves on” time (I wear medical gloves in order to keep skin oil from doing damage to the paint and decals) was about an hour.

It should be noted that at some point in the run-up to getting the model ready for release, Horizon found an error in the Font style of the “United States” lettering for the MR-1 mission. A small separate “sheet” of the correct Font and size is provided in the kit. I think that this speaks well of Horizon’s dedication to Quality Control.

The instructions are provided in a black & white 6”x8.5” 8-page pamphlet.

A “decal usage” guide is shown on page 1 which will indicate which decals are to be applied to each of those missions mentioned above. A Paint Guide is shown at the top of page 1.

I would like to thank Horizon Models and the IPMS USA for the chance to review this fine kit.

Base of Redstone rocket

Assembly guide along side of capsule

Assembly guide along side of escape tower

Base of Redstone rocket on stand

Base of model prior to decal application

Finished model prior to decal application