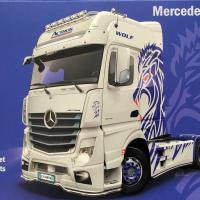 The Mercedes Benz Actros range of trucks was introduced in 1995 and quickly became a success hauling cargo throughout Europe and other parts of the world.

Italeri is well known for their extensive range of truck models. They exhibit very nice detail and are relatively easy to build. The top opening box shows a great painting of the “show” truck. Inside it is packed full of parts sprues, “rubber” tires, mesh for behind the star, instruction manual and decal sheet. There were three parts sprues contained within two plastic bags each, while the clear parts and additional chrome plated parts were in their own separate bags.

Construction started with the chassis. There were two parts to each chassis “I” frame and looked like a double bogey axel could be added/changed from the single axel in the kit. Air tanks, a battery container, engine mounts and structural cross members were assembled to form the chassis frame.

The inside of the chassis frames showed numerous large ejector pin marks, but, most would be hidden. Nearly every part in this model had ejector pin marks, which is consistent with every Italeri model I have seen or built. I cleaned up those that would be most visible and left the rest. Some ejector pin marks were located on parts that were highly visible like the rear cabin wall and ceiling. Filler and sanding took care of these. Large mold seams also had to be sanded or scraped away on many parts. None of this was difficult and the nature of the plastic made removing these blemishes easy enough.

The front and rear axles, suspension and shock absorbers followed and all fit together nicely. The front wheels are designed to steer. All the steering linkage arm shaft ends were melted using a heated knife after inserting them through the next linkage socket to lock them into place.

The engine was a sizable model-in-itself. The end result was a convincing miniature of the six-cylinder motor seen on the real truck. Most parts fit well. The radiator attached to the chassis and the cooling fan attaches to the engine front. Hoses and pipes from the engine to the radiator completed this assembly. The engine and radiator fit perfectly into their chassis mounts and were glued in place along with the drive shaft.

While still attached to their sprue, I painted the wheels Model Master enamel Chrome which gave them a nice polished Alloy appearance. The sprue attachment was right behind the rim and required careful cutting to remove the wheels without damaging the rim. The vinyl “rubber” tires were cut from their sprue. They show very nice tread pattern and some tire size numbering on the side walls. Once the wheel halves were glued together and tires installed, they look fantastic.

The fuel tanks and exhaust noise reducer were assembled, painted and attached to the chassis.

The cabin is nicely appointed and well detailed. Decals were used for instruments and steering wheel controls. I liked the grey color of the plastic and used black and silver to add contrasts to panel centers, dash and door trims. The walls of the cabin attach to the floor and ceiling to form an internal box. All parts fit very nicely. The sunroof was painted Tamiya Smoke. I used decals from a sheet I had for the Revell Germany version of this model that included all instrument panel controls, seat inserts and door panel speakers.

All the outer cab panels, roof, mirrors and various other cab related parts were painted Model Master spray can Classic White lacquer and decaled before joining them together. The side spoilers and roof were taped to each side panels to facilitate applying the large single piece wolf head decal that extended from just behind the side windows to the rear of the spoilers. I ran a new blade along the edges to separate the spoilers, side panels and roof for later assembly after the decals had dried and clear coat applied. The Cartograf decals were a little thick, but, laid down beautifully with a little Micro-Sol. I chose to paint the cab panels separately first as they assemble along natural joints, and it was easier to add the windows afterwards without having to mask them.

I sprayed the grill, wheel hubs and rear wheel mud guards with Testors enamel Dark Blue and found it was an almost perfect match to the blue decal color. The Wolf decals, grill and other items I painted blue really made the white cab “pop”!

After several failed attempts to bare metal foil the prominent Mercedes star, I painted it with a Molotow Liquid Chrome pen. I decanted the paint and applied it using a soft brush. There was quite a lot of flash on the star that was delicately removed.

Before joining the outer side cab walls to the internal cab “box”, I painted the side window surrounds rubber black and then attached their respective windows. This was followed by the windscreen being glued into the front cab panel. The fit was very good and the mounting surfaces were adequate for glue application. The “glass” was very thin and the sprue gates quite large in places. I used a razor saw to remove each part. The clear parts were one area where much care was needed as any rough handling could damage or crack the plastic. The large sprue gates certainly added strength and protected the clear parts while on the sprue.

The four cab panels and roof were carefully glued together which completed this part of the build. Take time to make sure all the walls line up so the roof sits flush all the way around.

When I built Italeri’s Iveco Hi-Way 40th Anniversary (https://web.ipmsusa3.org/content/iveco-hi-way-40th-anniversary), I learnt, after the fact that if the top grill panel is glued in its down position the cab won’t tilt. I now have a lovely engine that can’t be seen on that model! I built a hinge setup from a paper clip so I could raise the panel and be able to tilt the Mercedes cab forward.

I moved onto the chrome parts, specially added to this kit. This consisted of decorative piping that ran along the bottom of the side skirts, lower chin spoiler, spotlight holder over the roof, spotlights and horns. The spotlight holder had some flash that I removed along with mold seams that were quite visible. I used bare metal foil to cover and hide my clean up. The spotlights and their individual lenses were attached and the whole assembly glued to the roof. The spotlight lenses were not clear like the rest of the clear parts. I brushed Future Floor Wax (yes, I still have the old stuff!) over them which helped. The side skirt and chin chrome parts included lights that were painted clear orange.

Curiously, the large side rear vision mirrors did not include clear parts for the “glass” mirrors. However, the two small mirrors that aim down to show the driver where the front and side of the truck is to curbs, etc. do facilitate clear lenses. The previous edition of this kit included a sheet of chrome stickers that took care of all mirrors. I Bare Metal foiled all mirrors for a uniform look. All mirrors were attached to the cab using their mounting brackets. No fit issues were encountered.

Numerous brackets attach the side spoilers to the rear of the cab. They all fit fine and aligned quite nicely with the roof spoiler. All the brackets had mold seam lines that needed removing to improve their fit and appearance. The air pipe that attached to the cab air conditioner was also glued to the rear of the cab. It lined up well to the pipe leading from the engine with the cab down.

Two pins insert through brackets to mount the cab to the chassis. All of a sudden there was a large Mercedes Benz truck on my model bench!

The blue mud guards were attached to the chassis over the rear wheels. I needed to adjust these somewhat as the inside tires rubbed. The side skirts, with their orange “position” lights and blue wolf “fur” decals, were then glued to the front and rear mud guards. The taillights slot over a raised area on the mud guards and red and yellow caution decals are located below them.

To complete this Mercedes MP4, the sun visor, aerials and horns were glued in their position. Windscreen wipers, mirrors, step pads and number plates completed the build. After that, I sat back and admired my very striking Euro show truck!! It looks fantastic next to the Blue Iveco truck.

I enjoyed building this rig. It went together quite well and was not overly difficult to build. It was just let down by numerous ejector pin marks in many visible areas. This truck could be built straight out of the box without paint as most parts were already the correct color. With a little care and attention to details, I have no doubt that most modelers could build a very nice rendition of this kit, painted or not.

My sincere thanks to MRC-Academy, Italeri and IPMS USA for entrusting me to build and review this model.