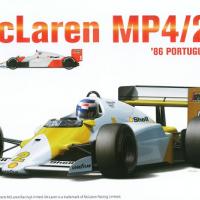 A little background about the car the kit represents:

It was the MP4/2C that McLaren introduced to the 1986 F1 Grand Prix. The McLaren MP4/2 was designed by John Barnard for the 1984 season. The McLaren MP4/2C was the updated version powered by a TAG-Porsche 1.5 litre V6 twin turbo engine with carbon monocoque chassis. A. Prost and K. Rosberg were the drivers. Rosberg ran a one-off livery in yellow/white, different from the common red/white livery, and was successful in attracting the attention of the fans and had a huge promotion effect.

The kit gives you markings to make the car driven by either driver. Looking at the kit, there are 80% new tooled parts to produce the car as in the 1986 Portuguese Gran Prix and includes details such as the suspension and cockpit, as well as the TAG-Porsche V6 twin turbo engine.

Inside the box, there are seven sprues including a small clear sprue holding the windscreen and rear light. There are four rubber tires, a set of screws for attaching the wheels and three decal sheets. There is an optional “Detail Up Set and it was incorporated into this “build project” and I will mention it when used. One thing I can say is that the instructions for the detail set were laid out perfectly in the instructions. The steps match exactly the steps in the actual instructions and show replacement parts, etc.

Construction starts with the engine, transmission, and suspension. Take note that there are three holes to be drilled out on the transmission. Color call outs are in Gunze colors. One note, the kit is molded with texture for the carbon fiber parts (which is almost everything) and the detail set replaces all of these. Also note that there are many decals to be placed on the engine, turbo’s, etc. all through the build. These are denoted by notes indicating decal and number. Assembly was straightforward, but in hindsight I would leave off the rear suspension to allow for alignment.

Next is the bottom pan in step 5, and here the detail set kicked in. The entire bottom pan is covered in decals of carbon fiber. Fourteen large ones that need time to settle. There is also photoetch for the nose and exhaust areas and silver stickers to represent the engine pan. The decals do make the parts look great. Once done, the front suspension was added.

Next, we turn to the “cockpit”. There are lots of decals for carbon fiber including the entire seat and body! It looks great but take your time. I did use Solvaset on the decals and they even resisted that. Also, all of the work here will not be seen if the top is not removable, except the seat.

The following steps pull it together by adding the engine and remaining suspension to the body pan, and then adding the cooling system. NOTE- DO NOT add parts M7 and M8 until you add the cockpit to the body. AND BTW, don’t forget to add the PE radiators into cockpit sides. I did and they cannot go on after assembly. Nuts! I screwed this up and had to pull them off to get it to fit. Sigh. Follow the instructions!? The tires can be screwed onto their mounting seats. I set this aside to work on the outer shell.

I started by building the tail wing and used the photoetch replacement parts and carbon decals. The main shell consists of the front and back parts, and I glued and puttied these together, several parts were added to complete the scoops and cockpit. The sides were added to the top also. In hindsight, I should have added the sides to the bottom and it would have been easier.

As for painting, there are two sets of markings, one for either driver. I chose the yellow/white livery of the #2 car. Decals are included for both but I chose to paint the kit and the yellow parts have a clear delineation, so it was easy. Several coats and clear coats later, it was time for decals. The instructions on the un-detail up kit shows a few decals, but this is where the decal up shines. Missing glaringly are the six Marlboro logos. These were added and make a huge visual difference. Once added. I clear coated and let dry for final assembly.

With my gluing of the sides to the top, this became difficult so do not do it. I managed to slide things into place around the rear suspension. The body is on pins and is meant to be removable to show off the detailed interior.

This project was a bit of a learning experience for me but this kit was a lot of fun and looks really cool! Definitely recommended and so is the “Detail-Up” set.

My thanks to Platz/NuNu for the opportunity to review this kit.