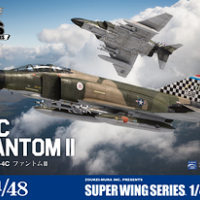 The McDonnell Douglas F-4 Phantom II is a tandem two-seat, twin-engine, all-weather, long-range supersonic jet interceptor and fighter-bomber originally developed for the United States Navy by McDonnell Aircraft. It first entered service in 1960 with the U.S. Navy. Proving highly adaptable, it was also adopted by the U.S. Marine Corps and the U.S. Air Force, and by the mid-1960s had become a major part of their air wings.

The Phantom is a large fighter with a top speed of over Mach 2.2. It can carry more than 18,000 pounds (8,400 kg) of weapons on nine external hard-points, including air-to-air missiles, air-to-ground missiles, and various bombs. The F-4, like other interceptors of its time, was designed without an internal cannon. Later models incorporated an M-61 Vulcan rotary cannon. Beginning in 1959, it set 15 world records for in-flight performance, including an absolute speed record, and an absolute altitude record.

The F-4 was used extensively during the Vietnam War. It served as the principal air superiority fighter for both the Navy and Air Force, and became important in the ground-attack and aerial reconnaissance roles late in the war. The Phantom has the distinction of being the last U.S. fighter flown by pilots who attained ace status in the 20th century. During the Vietnam War, one U.S. Air Force pilot and two weapon systems officers (WSOs), and one U.S. Navy pilot and one radar intercept officer (RIO) became aces by achieving five aerial kills against enemy fighter aircraft. The F-4 continued to form a major part of U.S. military air power throughout the 1970s and 1980s, being gradually replaced by more modern aircraft such as the F-15 Eagle and F-16 in the U.S. Air Force, the Grumman F-14 Tomcat in the U.S. Navy, and the F/A-18 Hornet in the U.S. Navy and U.S. Marine Corps.

The USAF tested the Navy F-4B in 1961 to see if it could serve as its main tactical fighter aircraft and decided to approve of a USAF version that was designated F-4C. The first F-4C prototype flew in May 1963 and production deliveries began in November 1963. The aircraft was modified with larger tires as compared to its Navy counterpart and the rear cockpit was reconfigured so that the rear-seat crewman could also fly the plane. Tail-hook, radome and hydraulic folding wings were retained. It used two J79-GE-15 engines capable of producing 17,000 lbs. of thrust each and had a RAM air turbine. The radar set consisted of a AN/APQ-100 radar and there was a AN/APA-157 intercept computer. The production stopped in 1966 when 583 F-4Cs were built.

The F-4C is the third version of the F-4 to be released by Zoukei Mura (ZM), following the F-4J and the F-4S. The kit comes in a large top-opening box, with sprues individually packed in cellophane. The box art is beautifully done in a nice gloss finish, with multiple images of the completed model on the side panels. There are 383 parts in total, although due to options, not all are used. The plastic is molded in a fairly soft gray, and the molding is very crisp with no flash and very delicate mold separation lines. For the most part, ejector-pin marks are hidden away, with the exception of some on the cockpit floor, inside of main gear doors, and on the landing gear. The clear parts are crystal clear, but fairly brittle.

The instruction manual is typical ZM… superb. Most steps show multiple views of the parts, as well as how they align when assembled. A parts list for each step is included, along with the parts’ actual names- a nice touch. Color callouts are in Vallejo and the actual color names are listed at the top of each page. At the front of the manual are color conversions to Mr. Color paints.

Construction begins with the ejection seats. Each seat consists of seven parts, and while detail is adequate, there are no seat belts or stencils included. The fragile upper ejection handles are also sprue attachment points (see included image), and I was unable to cleanly cut and clean these without breaking two of them. I ended up raiding my wife’s sewing cabinet for some black and yellow thread. I twisted a thread of each color together until a fairly tight spiral was made, then I coated the thread in white glue. The result not only replaced the broken plastic loops, but also looked better than I could have achieved trying to paint the black and yellow stripes.

Next in the build is the cockpit and front landing gear bay construction. Decals are included for the instrumentation and control panels, and with the use of setting solution, they conformed nicely to all the bumps and dips in the plastic. While there is sufficient detail in the plastic to paint them and forgo the decals, no color callouts are included for the cockpit details. In addition, ZM has nicely captured the differences in the F-4C cockpit from earlier releases of the F-4.

The cockpit fits snugly into the fuselage halves, which then are glued together. Instead of a seam along the top of the fuselage, there is a center spline that fits into the top, eliminating the need to destroy detail by cleaning up a seam there. This also means that the only seams needing attention are at the nose, underside of the tail, and vertical stabilizer. ZM includes two full engines, which are nicely detailed, but since very little will be visible, I only painted the interiors of the intake and exhaust sections.

Full intake trunking is included, which fits cleanly to the front of the engines. To avoid seeing seams where the top and bottom of the intake trunks meet, I sanded and filled the join, which was a bit tricky since I was working on the inside of the trunks. The combined intakes and engines are then attached to the lower fuselage/wing section, which then attaches to the already-assembled upper fuselage. The only seams to fill here are just behind the wings. The front intakes go on next per the instructions, but for ease of painting and decaling, I left these until later.

Next the upper wings are added, along with the main gear wheel well sides. The design of the wings, with positional control surfaces fore and aft, means there are no seam lines to deal with on the wings. Flaps and ailerons go on next and they can be positioned level or in an offset position. Leading edge slats are also included, and the two inboard ones for each wing are separate parts that can be attached fully seated on the wing or extended. The outer wing slats are also included, but they are molded on the wing, meaning that displaying extended slats requires some surgery on the outer wings. Because I wanted to avoid cutting the outer wings, I assembled all the slats seated fully on the wings. I left off the horizontal stabilizers until after painting. These can only be added in the level position without substantial surgery to the fuselage sides

Next up is the landing gear, which is beautifully detailed. There are some mold lines to clean up here. One of the big pluses for this model is the solid connections the landing gear have with the aircraft body. All of the landing gear doors are simple to install without being ‘fiddly’ at all. After assembling the gears, I set them aside until after painting.

Two canopy options are included, one solid piece for the closed option, and separate pieces for open canopies. I opted to go with open canopies, but used the single closed version as a handy painting mask for the cockpit.

Options for under the wing include a centerline fuel tank, two outboard wing fuel tanks, four AIM-9 Sidewinder missiles, and four AIM-7 Sparrow missiles. Even though the F-4C was used extensively as a bomber, no ground attack munitions are included.

For painting, I used Mr. Color as called out by the instructions. I used black electrical tape, cut into thin strips for masking the camouflage. Prior to decaling, the model was giving two coats of Future to provide a good surface for the decals. The decals are from Cartograf and went on nicely. I did have some silvering under some of the stencils. I had lots of problems with the checkerboard patterns on the vertical stabilizer. I used Solvaset to get them to conform to the various bumps and dips in the tail surface, but the decals became very brittle and started to flake off. I can’t be sure there was a problem with the decals themselves or with something I did wrong. ZM includes markings separate from the checkerboard pattern for modelers who want to paint the checker pattern themselves. If I were to build this kit again, I would likely choose that option.

Once the weapons, fuel tanks, and canopies are added, the final result is a beautiful F-4C, arguably the best F-4C kit on the market. The surface detail is excellent, and ZM has done a great job of capturing the look and subtle shapes of a Phantom II.

This is an exceptional kit and is highly recommended!

Thanks to Zoukei Mura and IPMS/USA for the opportunity to review this wonderful kit.