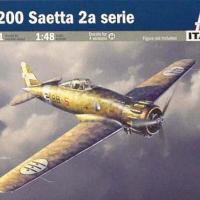 The most common fighter used by the Italian Regia Aeronautica during World War 2 was the Macchi MC.200, over 1150 being built in various versions. From the Mediterranean area and North Africa to Russia, the MC.200 saw action on all the main fronts. Based on the Fiat G-50 all-metal construction design, it was powered by the A-74 RC 38, a twin row 14 cylinder air-cooled radial engine. The engine produced 840 HP and was mated to a 3-bladed propeller, tightly packaged in its cowling, giving it distinctively bulged rocker covers. The Saetta was well liked by pilots for its maneuverability and rugged construction; however, the Saetta, when compared to its counterparts, was underpowered, outgunned, and outdated. These shortcomings were addressed with the next generations, the MC.202 and MC.205

An all-new tooling kit, following the release of the MC.200 Saetta a couple years earlier, the MC.200 Saetta 2a serie differs just a little. The most notable item would be the aft canopy glazing exposing the roll bar structure, whereas on the earlier variant this was faired over with a metal skin. As for what’s in the box, I found two large gray sprues and a smaller clear glazed sprue, one photo etch fret, a well-printed decal sheet featuring four decal options, and a well-illustrated instruction sheet folding out to 10 pages, counting both sides. The plastic is not too hard and not too soft, making for easy removal from the sprue and clean up. I did not find a lot of flash, and what I did notice was easily removed. I found the detail to be a little old school, and I was disappointed to see all the bogus rivets covering the wings. On the flip side, I was pleased to see photo etch used on the landing gear doors and cockpit area. The kit also features optional position flaps and cowling panels, plus the elevators are molded separately in the neutral position but can be manipulated up or down.

Starting with the cockpit in steps 1 and 2, I encountered no noteworthy problems; I found the fit to be excellent and the detail adequate. Some features in this area were enhanced with photo etch embellishments, like the chain-style harness added to the seat bucket and the multi-piece instrument panel complete with decal dials. Once finished, I found the overall appearance to be pleasing for an out of box cockpit.

Step 3 covers the engine build up and cowling. The engine itself consists of six pieces that fit OK and only needed a little attention by locking in the push rod tube into the rocker covers. The detail is good enough if you close up the cowling. The cowling itself starts in step 3 and finishes up in step 4, using 14 parts to build this thing, 15 parts if you count the access panel.

Step 5 closes up the fuselage halves with the cockpit sub-assembly and tail gear. All seem to fit well enough, but required a little gap filler just forward of the cockpit opening.

Step 6, landing gear struts and wheels, I detoured here just a bit and used a set of aftermarket resin wheels; the kit wheels are just a little too large for my taste.

Step 7 main landing gear bay and wing halves. All the parts fit OK, but the instructions offered no adjustment information for the bulkheads. I suggest that you dry fit the gearbay and wings to the fuselage before gluing anything up.

Step 8, mating the wing assembly to the fuselage. No big problems here and it only needed a little work and filler on the bottom aft seam. The detail is weak and missing in this area but was easily rescribed. I decided to close up the flaps, simply because the detail is poor. I finished up the step by adding the horizontal tail and elevators.

Steps 9 – 12, basically finishing up the landing gear, gear doors, engine attachment, and some little fiddly bits. I encountered no problems and found the fit great; the photo etch bracing on the gear doors is very cool and worked fine. Finally, steps 13 & 14 finish up with the canopy glazing and propeller.

Markings and decals – some of the smaller decals are misidentified but the rest are sectioned off according to the four options. The decals themselves are very nice, very thin, and respond well to Solvaset.

I’m not going to candy-coat it – at first glance I was pretty disappointed and hoped for something with a little more finesse. The rivets really turned me off and some of the gear bay detailing appeared really weak.

Now, as I sit here and study this little gem as a completed build, I have new appreciation for the kit. No, it’s not a toss-in-a-tube-of-glue-and-shake-the-box build, but rather an old school build, where fundamental modeling skills are practiced. I highly recommend this kit to any modeler who is looking for something a little different.

Thanks to Italeri, MRC, and IPMS for the opportunity to review such an awesome model kit.

Engine and landing gear
Previous Next